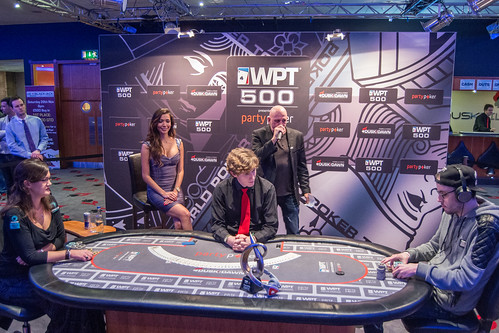 With £85,000 up for grabs for second place and £140,000, the trophy and of course the title on the line for the win, there is obviously a lot of pressure on both players.

However, you really can see the drive from both players to win, and there is even a little bit of friction between the players. It’s all friendly, of course, but neither of these two are going to be meeting up for a reunion in a years time. Noonan has jibed his opponent on the final table a few times for ‘always having it’, and in the opening exchanges, insisted that the latest raise from Eleanor was because "she found it again."

But in return, Eleanor refused to even answer the jibes, wrinkling her nose as if amused at the idea that she’s only playing strong hands, and when Matthew was at his lowest ebb on the final table, having lost the chip lead and dropped the table talk, reminded him of it.

that was with five players left, but you just got the feeling that these two were destined to meet heads-up.

Eleanor’s standard raise on the button is re-raised to from 1.55m to 4.1m by Noonan. Eleanor looks back at her cards, looks like she is just folding, then looks to the dealer.

A fold from Noonan.