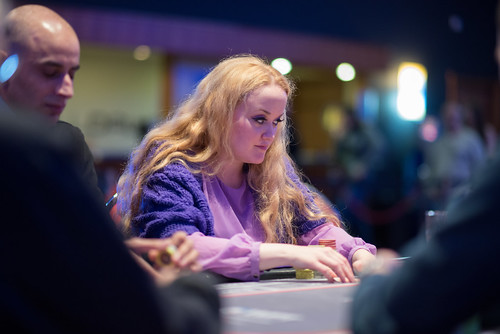 The table under the lights in the centre of Dusk til Dawn has been dramatic all day, with players busting regularly. The table is, therefore, fairly loaded. One player has been taking advantage of holding premium hand above premium hand, getting full value.

Katharine Arnsby was ticking along nicely on average stack until her tablemate, running short at around 15,000 chose to raise, then shove over the top of Katharine’s three-bet to 2,500. Arnsby called it off with [AdAc] and was way ahead of her opponent’s pocket queens. She stayed there, which put her up to around 45,000 chips. but she wasn’t finished there, managing to induce the all-in from her newest victim with [JcJs]. Katharine turned over [QhQs] and saw them hold to put her up to 66,300 as the second break came. Easy game.

Now back for the following eight levels, Katharine is one of several players with more than double their opening stack. Simon Deadman has taken the chip-lead with 115,000, while Ricky Wingate holds over 65,000 too. It’s a huge opportunity for those three players and everyone in the room to grab a meaningful stack to take through to Day 2.