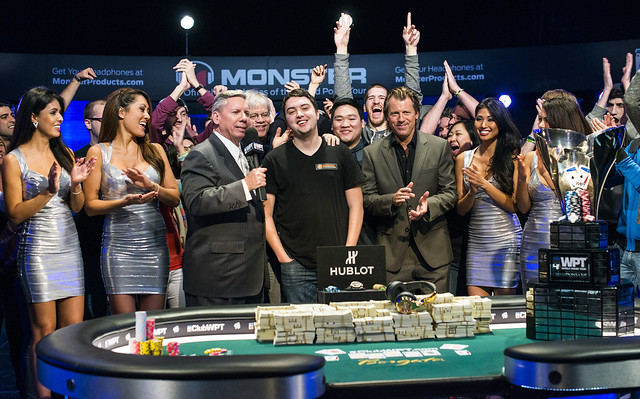 Asher Conniff had no intention of playing this tournament. He didn’t even plan to play the satellite that he won to get his seat. He was just trying to play a Sunday major online.

But after misclicking into an online satellite, the man whose online handle is “misclick” canceled a family vacation and bested a field 239 players to become the Season XIII WPT World Champion.

Conniff, a Brooklyn, NY native and Borgata regular, defeated Alexander Lakhov heads-up to earn $973,683 along with a Hublot Oceanographic 4000 Watch, a pair of gold Monster 24K Headphones and a WPT Champions Trophy. His name will be engraved on the one-and-only WPT Champions Cup, alongside all of the other WPT champions from all 13 seasons.

He also wins a $15,400 seat into next season’s WPT World Championship.

Conniff emerged as one of the chip leaders earlier in the tournament and held over a quarter of the chips in play with just two tables remaining. After losing some steam, he came into the final day second in chips, behind Lakhov, the man who he would later defeat heads-up.

The final table was a different story, as everything went Conniff’s way. Shortly after he eliminated WPT Raw Deal Analyst Tony Dunst was eliminated in sixth place, Conniff had amassed more than half of the chips in play with five players still remaining.

Conniff and Lakhov traded knockouts as Coniff disposed of Ray Qartomy in fifth and Brian Yoon in third, while Lakhov eliminated Carlos Mortensen in fourth.

That left the title up for grabs between the WPT Cyprus champion and Conniff, who was trying to turn a misclikc into just shy of $1 million.

Conniff began heads-up play with better than a five-to-one chip lead and it didn’t take long for him to finish the job. He extended his chip lead without any showdown and then was able to get all in preflop with A

After a board run out of 7

, Conniff secured the win and became the 13th World Champion in WPT history.