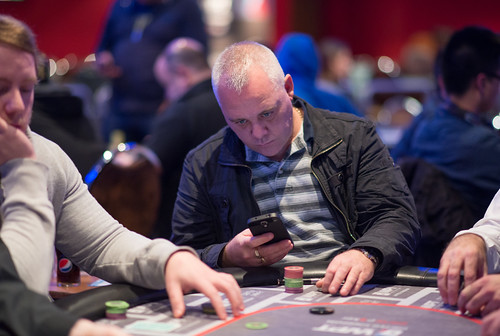 Above – players checking to see where they are in the chip-counts on Day 1C of the WPT500 in Nottingham.

Elsewhere, Lisa Bright got short and shoved her last three big blinds with [6s3s], called by [AhKd]. It could be worse in that position, and a king and six hit the flop to give her a sweat. but no help on the turn or river means Lisa is out. She may yet return later in the week, and plans to grind some up through cash to do so. The cash tables here at DTD are like the restaurant – superb.  There is a dealer’s game, severla NLH and PLO tables all rocking. A briliant poker festival isn’t thrown together with just a guarantee.