Believing He Can Fly 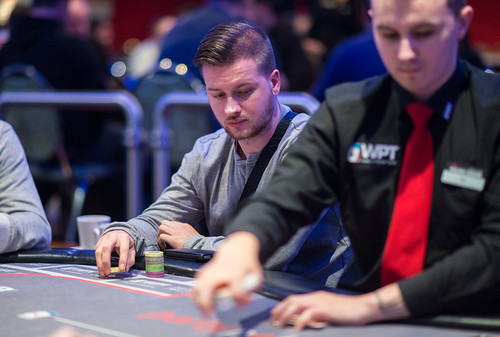 Ryan Kelly has impressed us today, a really solid performance and some great bet-sizing. He’s one of several very good players at a tough table with just over fifty players remaining here as we enter the final level of WPT500 Day 1D.

Ryan called David Raven’s raise pre-flop and saw a flop of [9d6h2h] before Raven pumped another 6,000 into a pot already worth 8,000. Kelly just called, and the players checked the turn of [2s].

On the river of [5h], Kelly led out for 10,000, and Raven eventually found what looked an agonising fold to make. Kelly shrugged, showed [AhTh] for the nut flush and calmly stacked his chips, while one of the several masseurs here at Dusk til Dawn worked his shoulder muscles limp again.

R. Kelly is a name we may yet see deep in this tournament.