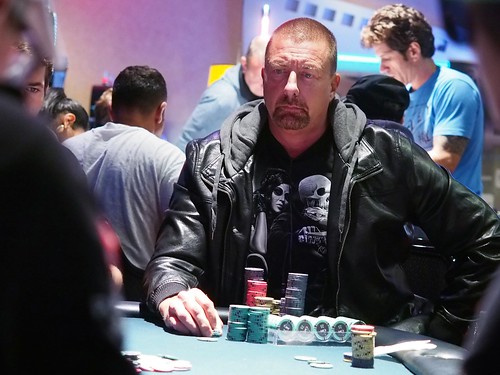 Day 1A at the WPT Caribbean Main Event is in the books on the island of St. Maarten. There were a total of 57 entries today and 25 have advanced to Day 2 on Wednesday, November 5th.

The chip leader at the end of play tonight is Bruce Kramer (pictured above) with 183,800. He took control of the chip lead after the dinner break and never looked back. Mike Linster (146,400) and Mike Leah (121,000) also bagged up top stacks despite ending the night at a tough table that included Allyn Shulman, Micah Raskin, and Darren Elias, who busted on the second to last hand of the night.

The familiar faces that weren’t as lucky on Day 1A include WPT Season XII Player of the Year Mukul Pahuja, Linda Johnson, Justin Oliver, Bruno Lopes, Darren Elias, Allen Kessler, and Anthony Zinno. They will all have a chance to re-enter on Day 1B on Tuesday. Defending WPT Caribbean champion Tony Dunst will definitely be in the field tomorrow, as he attempts to repeat as champion at this tournament.

Tune back in at 4 p.m. local time on Tuesday for the second starting flight at this tournament in paradise. The field will play another eight levels, and we will get a full picture of the field size and payout structure tomorrow.