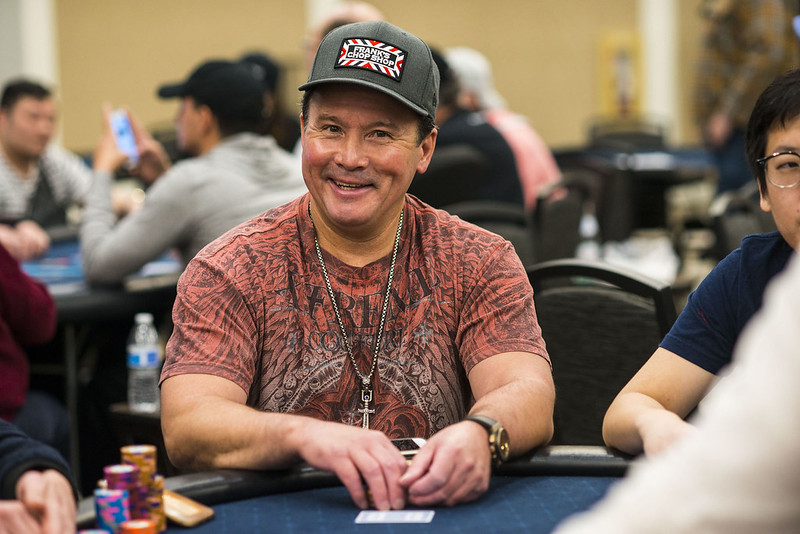 The big run continued here at the WPT L.A. Poker Classic for Frank Stepuchin. Already playing in the WPT Gardens Poker Championship final table on March 12 at HyperX Esports Arena in Las Vegas at Luxor Resort and Casino, Stepuchin won the great majority of his $10,000 buy-in into the championship event just minutes before Day 1 got underway at Commerce Casino.

Stepuchin was one of 10 players who ponied up $1,000 each and were all dealt a single Omaha hand. Holding

, Stepuchin was thrilled to see a flop of

on the turn and

on the river were then pretty meaningless.

Stepuchin celebrated his four of a kind, especially considering he’d contemplated changing his position at the table earlier.

“Yes, I didn’t change my seat!” he shouted after the win as he recorded a video of the hand. “PLO flip for a thousand each. I flip quads and I’m good, holy moly!”

At the end of Day 1, Stepuchin bagged 31,700. He’ll be part of the Season XVII Champions Cup Finals filmed for FOX Sports television March 11-13.

The final six players here at the LAPC will converge on HyperX Esports Arena on March 11 to play to a winner. That will be followed by the final six of the the WPT Gardens Poker Championship on March 12, and the Borgata Winter Poker Open on March 13.

Other scheduled events with final tables at the arena on May 30-31 and June 3 include the WPT Hard Rock Poker Showdown (April 12-16), WPT Choctaw (May 17-20), and Baccarat Crystal Tournament of Champions (June 1-2).

The arena features 30,000 square feet of gaming and entertainment space on multiple levels with a complete broadcast center and production studio. It’s designed to host every form of competitive gaming, including poker, in a cool high-tech environment.

Along with cutting edge production facilities, poker fans have drink and meal options at bars located inside the arena with TVs throughout offering a constant view of the action. Those in attendance can even live like a high roller and cheer on their favorite player in the “Owner’s Box” luxury VIP lounges.

Players will battle it out on a competition stage with a 50-foot LED video wall displaying all the action for those in attendance. Friends and family, as well as WPT fans, are all invited to attend. Looking to grab a seat and check out the filming of a WPT final table? Attendance is free and open to the public and those attending are encouraged to RSVP by clicking here.