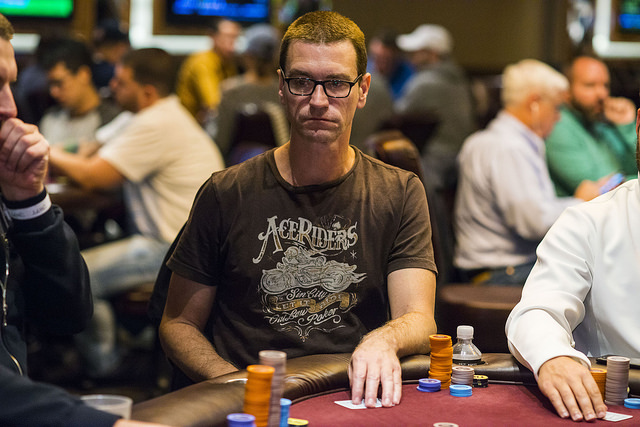 Players entered WPT Maryland in a multitude of ways, but no one qualified for less than Clayton Fletcher. The stand-up comic from New York City won his seat through a freeroll on the Maryland Live! casino Twitter page. Fletcher managed to have his golden ticket found among roughly 500 entrants and is still alive entering the latter stages of Day 2.

Fletcher was at Live! Casino for a few of the tournaments at the start of the WPT Maryland series and made the trip back town after having his name drawn.

“I was in town last week and played a couple of the other events and I didn’t really think I’d be able to come for this,” Fletcher said. “I had a bunch of gigs right in between the events I played last week and this one. Basically, I went home for two days and did those shows. Then, I found out I won the freeroll, came back, and now here we are in the money with 50 players left.”

Fletcher was introduced to poker by his mother, Carol, who Fletcher says was a cash game professional up until a year ago. His household growing up was filled with games and when Fletcher enters a tournament, his primary goal is do more than just make the money.

Although he’s already turned a tweet into at least $6,000, Fletcher has his eyes set on a much larger prize.

“Whenever I play a poker tournament, it doesn’t matter it’s a freeroll or not, I never play just to cash,” Fletcher said. “I look at those big numbers on the top and that’s what I always have my eye on even if it means busting out on the bubble. I’m not to into laddering, I try to play a way that will give me the best chance at getting first place. So far, it’s working out okay today.”

Coming into this week, Fletcher’s tournament résumé featured a respectable $160,000 in cashes with a top-100 finish in the 2015 World Series of Poker Main Event his best result. Fletcher credits that event for helping him wade through the WPT Maryland structure so far through two days of play.

“That experience helped me a lot,” Fletcher told WPT.com “It’s a deep structure and it takes sort of a long time to develop. You realize you have more time than you might in one of the smaller events. That experience showed me that even when you get a little bit short, you still have time to pick your spots and make your move.”

Should he win this week, don’t expect Fletcher to work more poker into his act. Fletcher shies away from the subject, given his audience, but thinks fondly of a day when he can perform for poker players.

“I’ve learned in stand-up that you want the audience to understand what you’re talking about, and since most of them don’t play poker I can’t get too specific,” Fletcher said. “If I could perform stand up poker for the World Poker Tour, for the poker players, it would be different than it is for a generic audience.”

Day 2 is near an end and Fletcher is just getting ready for his closing act. In his first career WPT cash, Fletcher is making the most of his free chance at the Champions Cup and a win would make his poker fantasies become reality.

“It’s something every poker player dreams of, to have a championship title. I’ve been watching the World Poker Tour since it started. For me to be up there with the whole team on the stage, toasting one day, would be quite a dream.”