Cowboy Up: LAPC’s Unique Remington Trophies Have Become a Major Part of the Event’s History 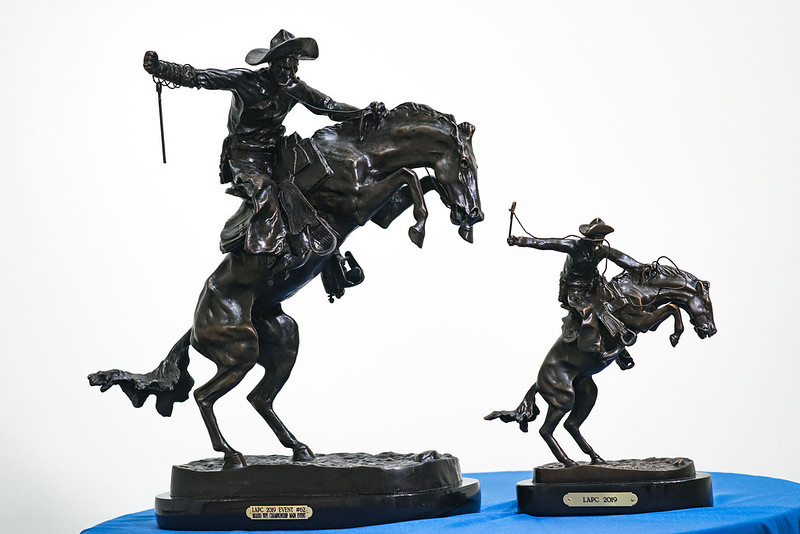 With a history dating back to 1993, the L.A. Poker Classic has plenty of history and prestige. This year’s series features 69 events played out over two months. Players in the WPT LAPC Championship event aren’t only vying for a chance at big money and adding their name to the Champions Cup, the winner also adds the Commerce Casino’s Remington statue to their trophy collection.

The trophy is one of the most sought-after pieces of hardware in poker. The sculpture is based on one of artist Frederic Remington’s first pieces called “Bronco Buster,” a real piece of Americana and the beautiful trophy harkens back to poker’s Old West roots – including many players battling it out on the felt in 19th Century California.

Remington was born in New York in 1861 and attended Yale University where he played on the football team. He fell in love with the American West on trips to Montana and New Mexico, and began memorializing the landscape, people, and culture of the region as a painter, illustrator, sculptor, and writer. Much of his work featured cowboys, Native Americans, and the U.S. Cavalry.

Adding a Remington becomes quite an addition to any trophy case and one of the originals has been housed in the Oval Office at the White House for decades.

During the LAPC, Commerce hands out a statue to every winner (not including survivor tournaments). The pewter trophies aren’t light, weighing about 14 pounds, and the opportunity to take one home has led to the nixing of quite a few possible deals at final tables through the years. Many times, players would rather just play it out for a shot at taking home the trophy.

The Remington for the WPT Championship stands out even more. The sculpture is about three times the size of the other Remingtons and weighs 44 pounds. Simply lifting the trophy isn’t easy, a fact Commerce tournament coordinator Justin Hammer discovered first-hand recently.

“I won a prop bet that I couldn’t walk it all the way around the room without putting it down,” he says. “I did it. It was only $10, but it was actually a freeroll.”

In Las Vegas, one player will walk away with much more than 10 bucks when the final table plays out at HyperX Esports Arena at Luxor. Lifting the Remington trophy above the champion’s head might be quite a feat as well.