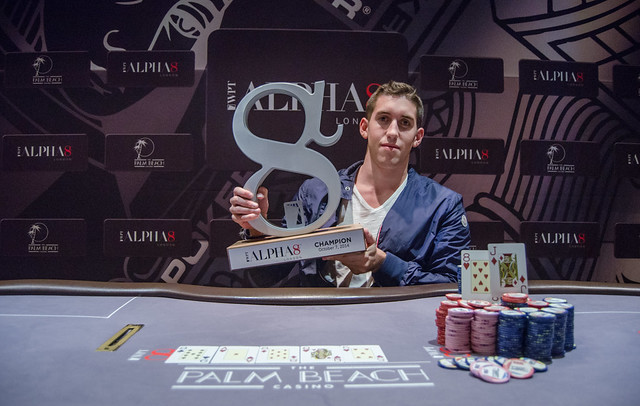 The first-ever WPT Alpha8 event of Season II has officially crowned a champion! Dan Colman, continuing one of the hottest streaks imaginable, had claimed the title, the amazing trophy, and the £600,000 top prize.

The first event of the season attracted 23 entrants with 17 of those being unique players. There were six re-entries, belonging to Daniel Cates, Max Altergott, Jean-Noel Thorel, Dan Colman, Fabian Quoss and Philipp Gruissem, and both Altergott and Colman took full advantage of their second bullet by making it all the way to the heads-up stage.

Erik Seidel, Philipp Gruissem, Faisal Alfalasi, Fabian Quoss, Igor Kurganov, and Stephen Chidwick were the players to fall short of the final table, and Talal Shakerchi had the big lead entering the final phase, before Colman started to show the table exactly why he has won everything that has been put before him.

Sam Trickett, Christoph Vogelsang, and Vladimir Troyanovskiy fell short of the money, before Sorel Mizzi bubbled the event at the hands of Colman. It was [Kd] [Qd] for Colman, [Qs] [Ts] for Mizzi, and the final four players were in the money.

Isaac Haxton would earn the smallest amount, when he got it in holding [Kh] [Qc] against the pocket kings of Shakerchi. The American took home £160,000 for his efforts, and he would soon be followed out the door by his vanquisher.

Shakerchi played excellently throughout, but found Colman to be a particular thorn in his side. The Hedge Fund manager exited at the hands of his nemesis when his [Ad] [6h] ran into Colman’s pocket queens. Shakerchi earned £224,000 for his third place finish.

The heads-up phase was between Dan Colman (1.6m) and Max Altergott (700k), and after Altergott found himself with the lead – after a series of double ups – the pair decided to escalate the blind levels and jump straight to 50,000/100,000. That decision resulted in a trio of all-in and calls, with the final one going the way of Colman: J8 v K4, when a second eight hit the flop to hand him yet another huge 2014 major title.

That’s a wrap for our coverage of WPT Alpha8 London. Thanks to the Palm Beach Casino staff for hosting a wonderful event and taking such fine care of the players and staff.