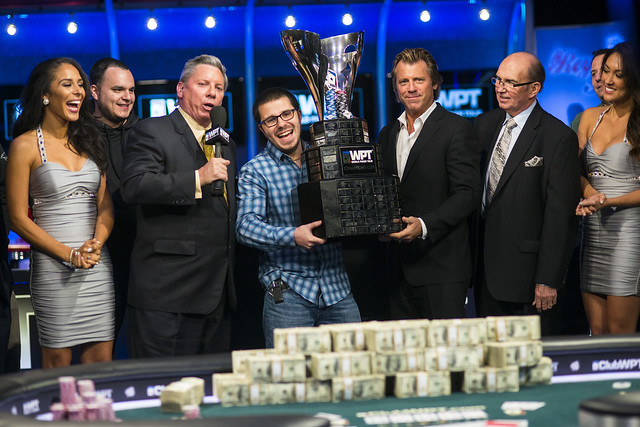 Most poker players go their entire career without claiming three million-dollar scores, but most poker players aren’t Dan Smith. He won the World Poker Tour Five Diamond World Poker Classic tonight at Bellagio and he can now make that claim at the young age of 24. The $1,161,135 he took home for first place put his career earnings at $5,689,703 and he also claimed his first WPT title. Smith came into the final table as the chip leader but his win was in doubt for a while. Eddy Sabat came on strong to gain the chip lead but Smith doubled up thru him twice and from that point forward he was unstoppable on his march to victory in Las Vegas.

Here is a look at the chip counts when cards got into the air:

The first 20 hands progressed quietly but the stack of Joe Serock dwindled during that stretch as he struggled to win a pot and was forced to shove all in as the short stack. He reraised all in for about 750,000 after Smith opened the action with a raise to 90,000. Smith was ahead with [AhJs] and Serock held [Qs10h]. The board was dealt [Ac6d4d3h7h] and Serock was eliminated in sixth place. He took home $175,766 in prize money at his third WPT final-table appearance.

Just a few hands later another pro who struggled to get anything started at the final table was all in for his tournament life. Smith raised to 90,000 under the gun to open the hand and Sabat called on the small blind. Barry Hutter reraised to 275,000 on the big blind and Smith tank-called. Sabat then reraised to a million and Hutter found himself all-in for his tournament life when he called. Smith got of the way and the [AsKc] was revealed by Hutter. He was behind the [KdKh] of Sabat, and after the board ran out [9d9s7h10sJs] Hutter was eliminated in fifth place, good for $219,165.

Four-handed play almost took us to the century mark, but when Gary Benson doubled up thru Shaun Suller on Hand 81 it sent things on course to the next elimination. Suller proceeded to shove all-in half-a-dozen times before he was finally called and forced to a showdown. On Hand 90 Suller moved all in with [Ad9d] and Sabat called with pocket queens. The board was dealt [Kd4c2c10d7h] and Suller was eliminated in fourth place, good for $303,793.

Three-handed play was another long battle but it featured a ton of doubles up along the way. Smith doubled up thru Sabat twice to place the players on completely different paths. Sabat was now at the disadvantage and he was all in just a few hands later on the 148th at the final table. He moved all in preflop with [Ac9d] and Smith called to cover him with [KsQs]. The board was dealt [KsJc6s3c10s] and Sabat was eliminated in third place, which was good for $436,160.

The run of doubles up and the knockout punch gave Smith a huge chip lead at the start of heads-up play. He took 11,940,000 into the final match against Benson, who held just 1,735,000 when cards got into the air between the final two players. It took just nine hands for the winner to emerge and it came as no surprise that it was Smith.

On the final hand Benson moved all in preflop and Smith quickly called. Benson was ahead with [4c4d] and Smith needed a little help with [Ks10d] in the hole. Smith found it on the board that was dealt [10c9c5d9d7h]. Benson was eliminated in second place and he was awarded $672,685 for his strong runner-up finish. Smith secured the third million-dollar cash of his career with the $1,161,135 score and he also won his first WPT title. Smith will also be back in April for the season-ending WPT World Championship and he will be a threat to go deep there as well.

That concludes our coverage from . Thanks to all of the staff at Bellagio for hosting a great event as always and a special congratulation to Tournament Director Jack McClelland, who will be retiring after this event. Thanks also to Joe Giron for providing the great photography from tonight’s final table; you can see more his work at www.joegironphotography.com.

The WPT pulls into later this week, where the just southeast from the coast of mainland will host WPT Korea from December 15-19. The tournament will feature full live coverage from the WPT Live Updates team.