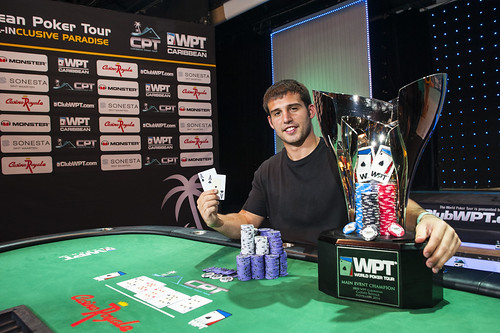 When one player enters a World Poker Tour final table with a chip lead so large that he holds more chips than the rest of his competitors combined, beating him for the WPT title is a tall task. That was the case at the start of play on the final day of the WPT Caribbean Main Event on the island of St. Maarten. Christophe Rosso held 1,932,000 chips when play began, while his competitors cobbled together just 1,609,000 combined. There were two tough challengers in Rosso’s way in the form of WPT Champions Club members Mike Linster and Darren Elias, and te latter would pull off a comeback that led to WPT history.

Elias had just won the WPT Borgata Poker Open in September and he entered the final table in second chip-position. He fought his way through the first four knockouts to earn a heads-up match with the chip Captain.

Elias doubled up twice during the heads-up match and took control of things once he had the chip lead to overcome the deficit and clinch the victory. Marvin Rettenmaier is the only other player to win back-to-back WPT titles (Season X WPT World Championship and Season XI Merit Cyprus Classic) but those two events were part of two different seasons. Elias became the only player to win back-to-back WPT titles in the same season with his victory today, and he is now the early favorite in the Season XIII WPT Player of the Year race.

Here is a look at the seating chart and chip counts when cards got into the air.

The eliminations started quickly at the final table when Dan Murariu shoved his short stack into the middle preflop on Hand 15. Mike Linster called to cover him with pocket queens and Murariu needed some help with [As9d]. The board was dealt [10s5c4hKh4c] and the queens held to win the hand. Murariu was eliminated in sixth place, good for $17,370 in prize money.

Just two hands later, Ziga Jamnikar was all in on a flop reading [Jh10h7c] holding [AcAd]. Christophe Rosso had him covered with [7d7s] in the hole, and his three-of-a-kind held up after the turn and river fell [2h10c]. Jamnikar was eliminated in fifth place, good for $22,280.

Action kept moving along on Hand 25, when Linster got all in on a flop reading [Ac10d7h] with [Ad10c] in the hole, but Rosso held pocket sevens once again for another set. The turn and river were dealt [Ks8c] and Linster was eliminated in fourth place, good for $28,950.

The brisk pace continued the fast march down to heads-up play when we lost another player on Hand 37. George Griffith was all in preflop with [Kh10h] in the hole and Rosso had him covered holding [Qs6h]. The board was dealt [6c5c5h5s8h] to give Rosso a full house. Griffith was eliminated in third place, good for $42,100.

Rosso took a massive stack worth 2,922,000 into the heads-up final and Darren Elias held 619,000. This was when the pace of the final table made a complete change. The fast play during the previous four bustouts was replaced by slow, measured play between the final two competitors.

Elias doubled up twice against Rosso to even the score and take the chip lead. Once he had the lead Elias took control of the match, but Rosso was not going down without a fight either. On the hundredth hand of play between the final two, Rosso double up on a short stack to keep things going. Five hands later, Rosso doubled up again and it looked the heads-up match was destined to become one of the longer ones in WPT history.

But just two hands later it was all over. Rosso moved all in preflop on the button and Elias quickly called. Rosso held [7d6s] and he was far behind the [AsAc] of Elias. The final board was a roller coaster ride that was dealt [10h6h5c7c5s]. Elias held the lead until the turn, when Rosso raced ahead with two pair, but the river made Elias a better two pair on the river to win the pot and the tournament.

Rosso was eliminated in second place, good for $64,900. Elias took home the top prize worth $127,680, his second WPT Champions Cup, and another pair of Monster DNA headphones. Most importantly he achieved something that no other player has accomplished in the previous twelve seasons on the World Poker Tour by winning back-to-back titles in the same season.

That concludes our coverage from the WPT Caribbean Main Event. Thanks to the Sonesta Maho Beach Resort and Casino Royale for hosting another great event, and thanks to Joe Giron for the amazing photography from the final table. You can find more of his work on his website, www.joegironphotography.com. If you want more live coverage from the WPT Live Updates team you can start following the reporting from the WPT bestbet Bounty Scramble that began today, and runs until Tuesday, November 11.