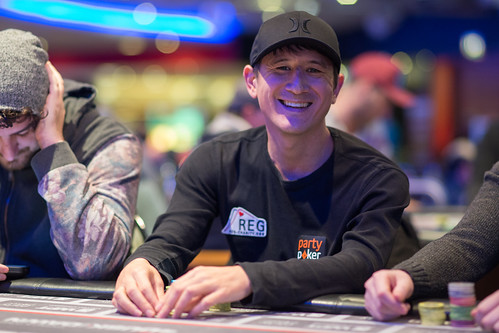 Lee Davy got off to a reasonable start, but he’s taken a very big hit to his stack in the run-up to the first break here at Dusk til Dawn.  The WPT500 field today is full of great players, WPT winners included.

Cox makes a straight on the river, and Lee had around a third of his starting stack left to play with.

Shortly afterwards, Lee bets 850 into a pot already worth around 2,500 on a [4hQs8c] flop. Called by Roger Wright, the turn of 6s is again led by Davy, who pumps 2,650 into it, and again gets called by the stoic Wright. On the river, Davy bets 2,500, but is shoved on for his tournament by Wright, who easily has him covered.

Davy tanks, but eventually elects to fold and preserve his stack of just 9,700. It’s been a rough day so far for him.