Day 1A Ends with 52 Players and Randy Bowie on Top 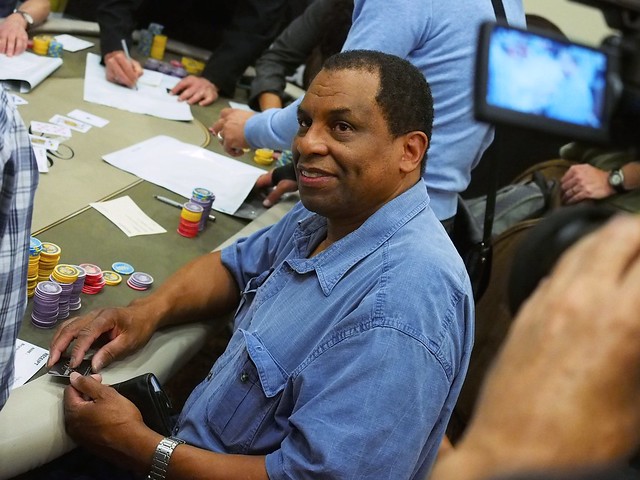 The last of the players are bagging up their chips and the first of three starting days of action here at The Bicycle Casino is in the books. From a starting field of 156, just 52 remain.

Among the notables who made it through the day are WPT host and Poker Hall of Famer Mike Sexton, Ryan Riess, Champions Club members Mohsin Charania, Chris Moorman, Joe Tehan, JC Tran, Lee Markholt, and Scott Clements, and Season XI Player of the Year Matt Salsberg, who at one point was down to just 3,000 chips, but managed to rally to finish near the top of the counts with 187,700.

The player leading the way is Randy Bowie (pictured above), who bagged up 217,800 chips and a brand new pair of Monster DNA Pro headphones.  He just edged out Massoud Eskandari and Andrew Shack, who ended with  215,400 and 209,800 respectively.

Some of the players who did not make it through the field today include WPT personalities Vince Van Patten and Tony Dunst, Joseph Cheong, Kathy Liebert, and past Legends champs Will Failla, Andy Frankenberger, Josh Hale, and Jordan Cristos.

There are several more chances for those players to advance through to Day 2 though. Day 1B kicks off at 1pm tomorrow, followed by Day 1C on Monday.  In the meantime, the Day 1A survivors get to sit back and enjoy the rest of the weekend before returning for Day 2 on Tuesday.

The complete end of Day 1A counts are available on the Chip Counts page.

That’s it for tonight, but head back here tomorrow for Day 1B action starting at 1pm PT!