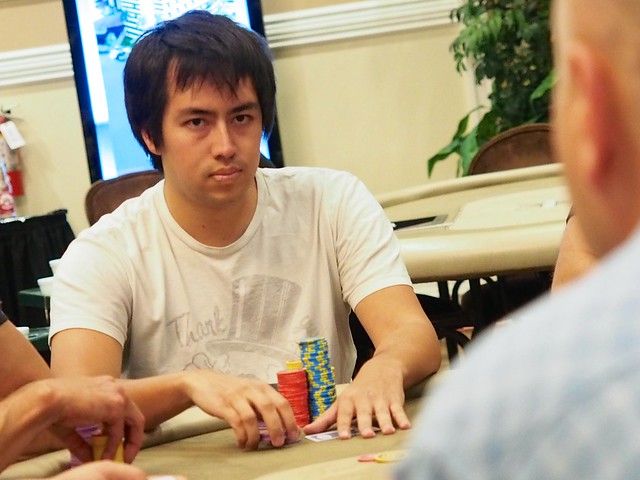 After three starting days and plenty of poker, the third and final starting flight of the Legends of Poker Main Event is in the books. Currently, the field size stands at 566 entries, with 52 advancing from Day 1A, 76 advancing from Day 1B, and 95 making it through the day today.

This field will still grow come tomorrow though, as players have the option to buy-in for $10,000 at the start of play on Tuesday with 72,000 chips, a 60-big blind stack. There are at least a dozen players who won satellite seats for the "quantum reload" option and a couple of players who have confirmed they will be back for another shot on Day 2.

Day 1C was the largest of the starting fields with 222 entries, including several players taking another shot at this tournament.  Some of the players who managed to get through on another try include Jesse Martin, Freddy Deeb, Justin Oliver, and Darren Rabinowitz. Several others, like Barry and Allyn Shulman and David Williams, showed up today and managed to get through on their first try in this tournament.

Some of the players who found the third time was not the charm in this event included Tony Dunst, Christina Lindley, Sean Jazayeri, Richard Seymour, and James Carroll.  Others who played today and busted include Phil Laak, actor Bill Fagerbakke, Sam Stein, Keven Stammen, Taylor Paur, and Michael Rocco.

The player who leads the way at the end of today is Tyler Cornell (pictured above), who spent most of the day near the top of the counts and ended with 258,300, which is good enough to put him second overall behind Nick Grippo heading into Day 2.  For his efforts, Cornell earns a pair of Monster DNA Pro headphones for being the Day 1C chip leader. Other big stacks to survive today include Nipun Java (160,600), Christopher Whitcomb (157,200), Dan Matsuzuki (154,000), and Jared Hamby (119,600).

The 223 players who advanced from Day 1 will be back in action on Tuesday starting at 1pm PT.