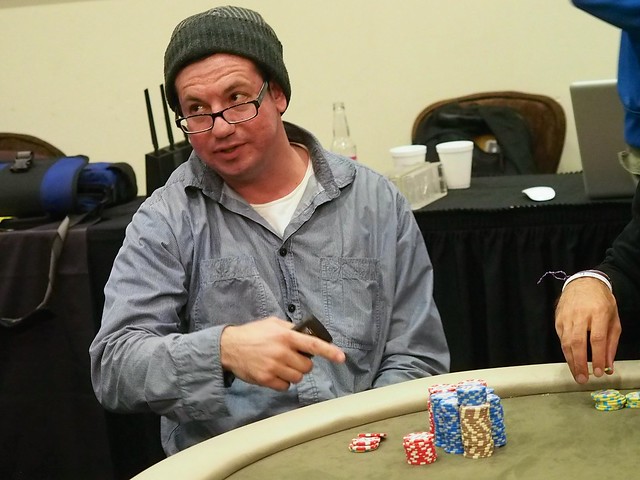 The player in the best position to do just that right now appears to be chip leader Chris Tolone (pictured above), who is the only player close to a million chips, thanks to a massive pot late in the day when his pocket queens managed to best start of day chip leader Nick Grippo’s pocket kings.

Tolone was just one of several big stacks at his table along with Grippo, Owen Crowe (605,000), and Jeremy Kottler (568,000).  The big stacks will be broken up when the field redraws for new seats tomorrow.

Other notables to make it through the day include Amit Makhija and Matt Salsberg, both of whom rallied from extremely short stacks to end the day with chips. Champions Club members Lee Markholt, David Chiu, Keven Stammen, Freddy Deeb, Andy Frankenberger, and David Williams all advanced as well, as did Ryan Riess, Layne Flack, Allyn Shulman and Tyler Kenney.

Laak was one of 27 players to buy-in for the event this morning for $10,000, but he was also one of the first casualties of the day. Other quantum reload players who didn’t advance include Greg Mueller, Richard Seymour, and Richard Sklar. Howeer, there are several players who did buy in late and fare just fine, including Eslami, Stammen, and Flack.