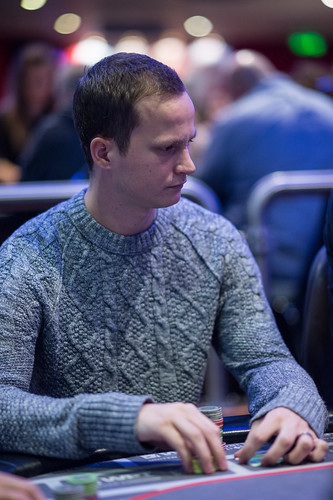 After busting his first bullet in record time (Simon was the first player to bust and take advantage of his sole Day 1D re-entry option) Deadman has proved that its hard to keep a great player down here at WPT500.

Having admitted to us that he made a massive mistake in the first elimination hand, he’s back to his best here. Simon flats the raise of David Johnson  and sees a flop of [Qc3sJd] whereupon Johnson bets small and Deadman calls. Both players check the [4h] turn, but Johnson leads the [Ts] river for 3,200. Simon raises to 10,000, eliciting a shove all-in from Johnson for 35,000. A very quick call from the Hollywood Poker Open, and cards are shown.

It’s low straight crsuhed by high straight for Johnson, who hands over the chips and doubles up Deadman to 70k. You can tell how happy the other players at the table are. Clue – they’re asking which table breaks next.