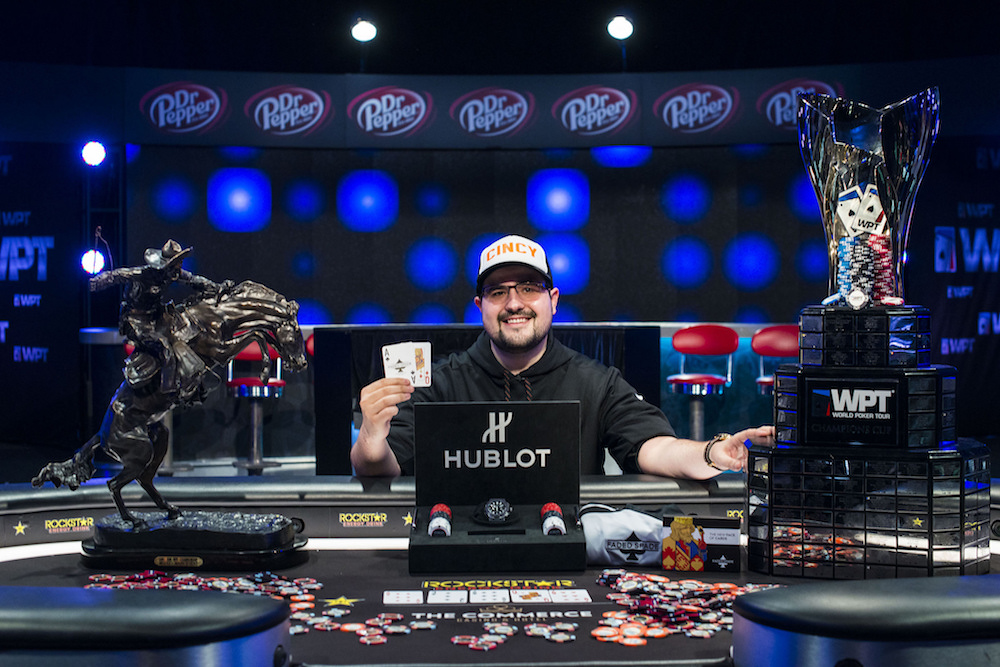 All it took was two hands of heads-up play for Dennis Blieden to eliminate Toby Lewis in second place and win the Season XVI WPT L.A. Poker Classic $10,000 Championship! Blieden scored a first-place prize of $1 million, which includes a $15,000 seat into the season-ending WPT Tournament of Champions, plus he took home a luxurious Hublot Big Bang Steel watch and a $5,000 membership to JetSmarter.

Blieden topped a field of 493 entries to win the title.

Lewis, who was fresh off his first-place finish in the 2018 Aussie Millions Main Event for more than $1.1 million, finished in second place and added another $600,630 to his bankroll.

Not only was heads-up play over in a snap, but the entire final table lasted just 79 hands. In about four and a half hours Blieden sealed the deal.

Blieden entered the final table second in chips behind only Lewis, and he jumped out in front on the sixth hand of play when he knocked out Manuel Martinez in sixth place. Blieden and Lewis then traded blows over the next few hands, including playing a pot worth 3.24 million on the 11th hand that saw Lewis really take a big lead.

Although Lewis maintained the lead for a few hands after, Blieden narrowed the gap on the 14th hand of play when he knocked out Peter Hengsakul in fifth place.

For much of the final table, it seemed as though Blieden was in every hand. That included the 17th hand of the final table in a pot of 1.46 million against Derek Wolters. Blieden won that one and once again narrowed the gap with Lewis.

On back-to-back hands a little while later, Wolters found a double through Blieden before Blieden scooped a pot of 1.71 million from Lewis. That started a run of hands for Blieden that saw him win four in a row as he pressed on the gas with more emphasis.

On the 35th hand, another huge pot was played, and again it involved Blieden. He tangled with Lewis once again, scooping up a pot of 3.94 million to move into the chip lead. The 41st hand was another big pot pushed Blieden’s way, this time for 3.36 million, then he picked up another run of four in a row from Hands #47-50.

Blieden finally took a break on the 57th hand when he kindly let Lewis take care of knocking out Marc Macdonnel in fourth place to set up three-handed action. At that point, it was Blieden well out in front with 9.745 million, and Lewis and Wolters with 2.765 million and 2.27 million, respectively.

After Lewis won the first hand of three-handed action, Blieden won the next five and moved to more than 10 million in chips. On the 64th hand, Blieden raised blind from the button, although he ended up losing the hand. According to Tournament Director Justin Hammer and the WPT updates, raising blind from the button was something Blieden did a few times during three-handed play.

Lewis took a chunk out of Wolters when he doubled through him on the 72nd hand. Then Blieden finished Wolters off five hands later.

Heads-up play saw Blieden’s towering stack of 11.83 million against the 2.95 million for Lewis. The first hand went to Lewis, and the second hand ended it all in Blieden’s favor.

. Blieden checked, Lewis jammed all in for 2.2 million, and Blieden made the call after a little bit of thought. Blieden tabled the

for a turned two pair, having pulled ahead of Lewis’

. The river ended it all with the

Blieden entered the Season XVI WPT L.A. Poker Classic Championship with just $21,980 in live tournament earnings, according to his HendonMob.com profile. After the dust had settled, he was left standing with a $1 million prize, a Hublot watch, a JetSmarter membership, and a seat to the WPT Tournament of Champions.