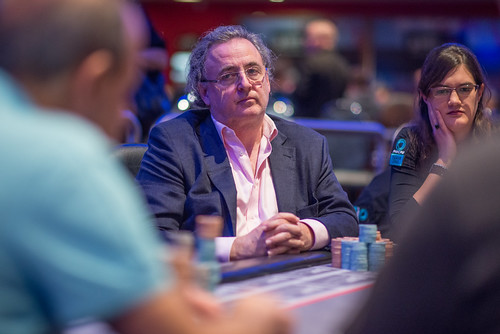 Could it be Ladies Night?

PKR Pro Eleanor Gudger has knocked out Derek Payne in two hands here in Nottingham as the WPT500 reaches a thrilling climax, grabbing the chip lead by around eight million chips in the process!

In the first hand, and for almost all of his chips, Eleanor raises under-the-gun to 1.3million, Matthew Noonan calls, and Derek re-raises to 4.6million. Eleanor shoves over the top of that raise for around 13.5million and after Noonan folds, Payne eventually decides to call it off.

The board brings instant pain for Payne, and elation for Eleanor, with an ace on the [7h9cAc] flop and another on the river as 4th & 5th street come out [4c] and [Ad]. Derek is down to just 2.9 million or five big blinds.

One hand later, blind on blind, they get it in. Small blind Derek looks at his cards and quickly shoves, and while counting her chips, knowing that if she looked at them she might question what is an obvious mathematical call, Eleanor called then turned them over.

A seven on the flop puts Eleanor ahead, and she fades both turn and river to bust Derek Payne in 4th for £35,000.