Down To The Wire 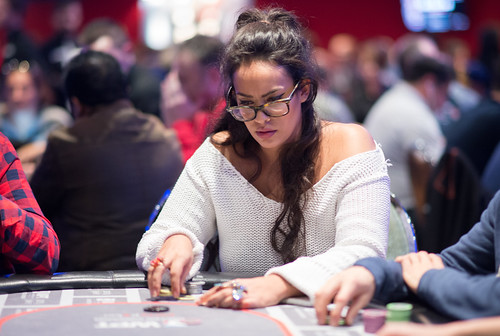 With just an hour of play remaining, everyone is desperate to make the next day of play, and possibly to avoid having to play tomorrow, when it seems the world and his backer are going to be in the building.

Sarah Berry (pictured) is one of the players who will have to come back tomorrow, but she’s one of only a few females on the rail.  Penny French is surviving, largely because she just won a crucial three-way all-in.

Danny Tran was the big winner in the first all-in, when he shoved over the top of a short-stack’s all-in and roped in another player who’d called the original all-in:

The board ran out a dramatic [7c8s2s] (Esther stands up, Mark gets excited) [7d] (Excitement cancelled) [6s]

Mark was left with fresh air, Esther on her toes out of the cardroom and Danny piling up 207,000. But in the next hand, Penny, who used to deal right here at Dusk til Dawn, Mark (for 5,200) and Jatindra Dawar had it all-in pre-flop too.

The board ran out [Th9h8c8c9d] to give Penny the lot and send two players looking for amusing ways to break through the midnight hour away from the felt.