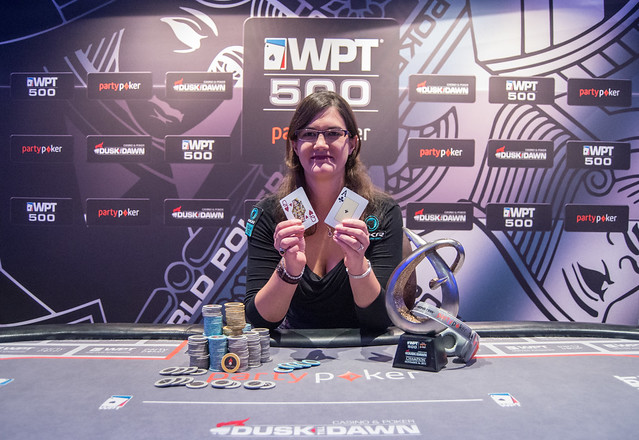 We have a winner!

After working herself into a strong lead, Eleanor Gudger has won her first major live tournament and beaten Matthew ‘silentnoonan’ Noonan heads-up for £140,000, the trophy and title!

In the end, a rather cold deck in terms of heads-up hands ended the spectacle, when Matthew shoved with [Ah9c] and Eleanor called with [AcQh].  Railers for both players cheered on for their friend, but a grimace from Matthew and step away from the table showed how crestfallen the cards being on their back made him.

Eleanor sat still, hands pressed together, staring at the flop, waiting for the cards to obey the odds and fulfil her dream, ready for the next hand if they wouldn’t.

The dealer fanned [KsKdAd] , three cards that surely would have seen the chips go in post-flop if they hadn’t gone in before it.

"Chop it up!" shouted Noonan’s rail.

"No chop, no chop" shouted Gudger’s. Still she couldn’t look away from the felt.

The turn was a [5h] and a look of resignation came across Noonan’s features, the headphones around his neck. The rail didn’t cheer this time, just waited, hoped, half for the miracle nine, the others for anything but.

The [4c] on the river led to an almighty roar from Eleanor’s supporters, the victor’s head finally dropped away from the table she seemed to have a hypnotic stare on during the final.  Both players shook hands, and you felt like in the end, a gladiatorial respect took over.

They’re different types, but both brought so much to the game tonight and to the tournament as a whole during the last eight days. At no point did anyone declare Gudger the ‘longest lasting female’, or ‘best female player’ despite that being true from two tables out. She was just a great player, one to be feared by opponents, but applauded by everyone. And she was.

After the applause stopped, Eleanor was in shock at her first major win.

"I’m just over the moon," she told us, "It’s such a huge field, over two thousand players, it’s just incredible."

It certainly was, and Matthew was full of praise for his adversary.

"She played great. I don’t know if I can empty the clip when she had the ten, but I couldn’t have done much more."

When asked what she’d spend the winnings on, Eleanor said that her dream wedding next year might just have a planner.

"We haven’t got  venue or everything sorted out yet, so this will really help. We can pay off some of the mortgage too, which is great!"

Here are the final table pay-outs: