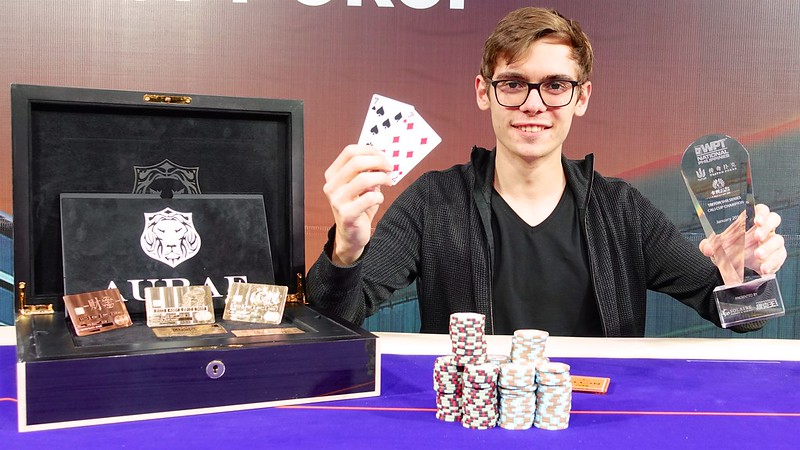 At just 22-year-old, Fedor Holz has accomplished more than most can dream of in the poker world. Holz takes home his high-roller title in the last three weeks after topping a field of 52 players to take home $3,463,500 in the $200,000 Triton Super High Roller Series Cali Cup at the Solaire Resort and Casino in Manila.

With his win in Southeast Asia, Holz has won back-to-back High-Roller events. Just a few weeks ago, Holz took home his first High-Roller title in the $100,000 WPT Alpha8 Las Vegas at the Bellagio.

He earned over $1.5 million for his win in Las Vegas which makes his tournament earnings over the last three weeks to over $5 million and his career earnings to over $7.3 million.

Over the last two days at Solaire, Holz defeated a field full of some of the best players in the world and defeated David Peters, who bubbled the Alpha8 event that Holz won, heads-up to take home the trophy.

When cards got in the air at noon, late registration was officially closed and there were 33 players remaining from the 52 official entries, but only eight of those players would earn a cash. Stanley Choi was the official bubble boy, finishing in ninth place and giving the remaining eight players a payday.

The tournament was played out six-handed, so it wasn’t until Mike McDonald finished in eighth place ($351,320), was the unofficial final table of seven was reached and it was Phil Ivey who held the chip lead at the start of seven-handed play, holding about 20% of the chips in play.

The next player to bust was Paul Phua, who had pledged to donate half of his earnings in this event to charity. Phua finished in seventh place to earn $401,600, which means that he’ll be donating more than $200,000, evenly split between the Philippines and his home country of Malaysia.

But back to Ivey, who was poised to add yet another title to his impressive poker resume (which already includes the WPT Champions Club and 10 WSOP bracelets). He had eventual winner Holz all in and covered with K-Q against Ivey’s Q-Q. But Holz spiked a king to double up and knock Ivey down to the short stack. Holz then finished the job when his A-Q held up against Ivey’s Q-J, eliminating Ivey in fifth place for $656,500.

Holz went on to use that momentum (and Ivey’s chips) to emerge as the chipleader after a few orbits of four-handed play. Holz really separated himself from the pack when he eliminated Steve O’Dwyer in fourth place.

When O’Dwyer hit the rail in fourth, Holz held almost 70% of the chips in play and he never looked back from there, cruising to victory in less than 30 hands.

Along with the prize money, Holz takes home an Aurae Solid Gold MasterCard with Executive Lifestyle concierge benefits for one year.