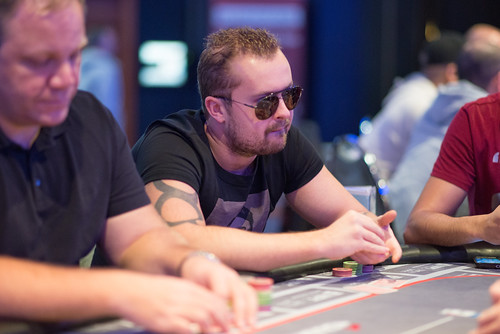 Viktor Ilyukhin has played in $10k Heads-Up bracelet events and big buy-ins for years, so he’s not going to be ruffled by the stakes in this million-pound guarantee tournament.  True, the prizes have been announced, and with £1,000 for a minimum cash and £140,000, these are big, life-changing sums of money to many players. But to Ilyukhin, it’s another tournament, another opportunity.

Wit his father watching on having busted this morning in the turbo Day 1G, Viktor ‘Junior’ took on his opponent heads-up in the first hand we saw,  after a flop of [8s8cAd] led to his opponent betting 15,000. Viktor just called and the turn came down [As]. Again, Viktor check-called 15,000. On the [Ah] river, Viktor snap-called the shove all-in from his opponent, and turned over [Ac-8h] for quad aces! He’s flopped, turned and rivered three different hands that were the nuts each time!

However, what goes up must seemingly come down, a little anyway.  In the next orbit, Viktor called the all-in of an opponent holding [JsKh], Viktor holding the pre-flop nuts – [AhAc] With three clubs on the board until the river, but two cards to give his opponent a gut-shot, the only cards that can help him against Viktor’s hand are the off-suit (non clubs) queens in the deck.  Increidbly, the queen comes from nowhere on the river and Viktor has to hand over a chunk of his new winnings.

Poker can be the cruelest of mistresses at times…