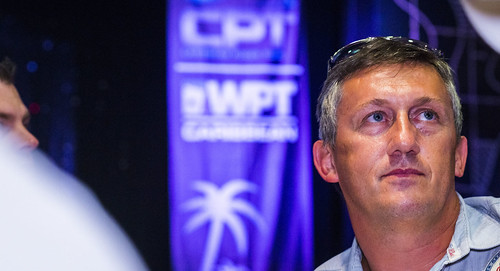 The final table of six is set at the WPT Caribbean Main Event on the island of St. Maarten. There was another longer than expected day of play on Thursday as the final 15 players sat down to play poker with deep stacks in this well-structured tournament. The final table was set after midnight local time when Alain Medesan busted on the final table bubble.

Leading the way tomorrow will be Christophe Rosso (pictured above) with 1,932,000. Rosso is way out in the lead, but he will have some tough competition to contend with in WPT Champions Club members Darren Ellias (495,000) and Mike Linster (329,000). Elias is attempting to become the first player in WPT history to win back-to-back titles in the same season. He won the Borgata Poker Open back in September and took home $843,744 for topping a field of 1,266 players. He will onyl have to beat out five opponents to enter his name in the WPT history books, but Rosso has a big chip lead to conquer.

Here is a look at the seating chart and chip counts when cards get into the air.

Here is a look at the prize money up for grabs at the final table.

We started the day with five WPT Champions Club members, and although two advanced to the final table, there were three that were not so lucky. Will Failla (13th Place), Anthony Zinno (12th Place), and Jonathan Roy (9th Place) each busted on Day 3.

Stay tuned for final table player bios before the start of play tomorrow, which will begin early on Friday at 11 a.m. local time. You can follow along with all of the action in hand-for-hand live updates and photos. You can also (hopefully) watch the final table on the WPT Live Stream that will feature commentary from WPT Raw Deal Analyst Tony Dunst and is scheduled to start at 11:30 a.m. There may be changes with the live stream tomorrow due to uncontrollable forces, so check back here for updates to the live stream broadcast.