Fourth Time's the Charm for Lichtenberger at Bellagio 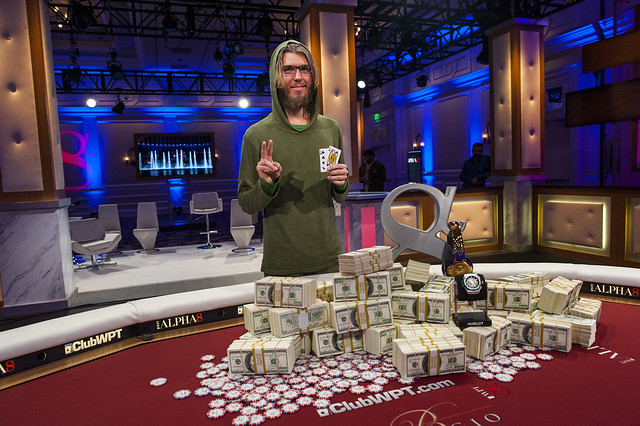 When it comes to December, Bellagio, and poker pro Andrew Lichtenberger, well, there is a bit of a history. You could say it is a good one, as he’s come close to victory in the World Poker Tour Five Diamond Main Event several times–finishing eighth in Season IX, making the final table and taking fourth in Season X, then making the final table a second consecutive time in Season XI, finishing in fifth place.

It is an incredible run, no doubt, but tonight, Lichtenberger ensured that his name and Bellagio in December will be inextricably linked forever by winning the first-ever Alpha8 tournament at the Las Vegas resort, collecting a career-high payday of $2,104,245.

When the day began, Lichtenberger was in good chip position, but it was Brian Rast who led the final eight by a sizable margin.

It took just ten hands for Lichtenberger to move out front though. Rast chipped back up a bit, eliminating his friend Phil Laak shy of the money in eighth place, followed by Brandon Steven on the money bubble just three hands later.

Rast may have handled the first couple of knockouts, but it was Lichtenberger who technically disposed of Bryn Kenney in ixth place, though it was Noah Schwartz who did most of the dirty work, doubling through Kenney and leaving him with just a single ante.

Rast did get his revenge on Lichtenberger, rivering a full house and managing to get Lichtenberger to call his all-in and send him to the top of the leaderboard once more.

Lichtenberger battled back though and the two were neck and neck for the lead after Rast knocked out Jason Les, who drove to Vegas from Costa Mesa, CA after hearing about the record-setting Alpha8 turnout, in fifth place.

With four players left, Noah Schwartz put himself in contention for the lead too, while Tom Marchese, who won a $100,000 Super High Roller at Bellagio back in 2012, laid low waiting for his time to chip up.

Schwartz lost a chunk of his chips to Lichtenberger though, then the young pro they call “luckychewy” finished Schwartz off in fourth place when he picked up pocket tens to Schwartz’s pocket fives to move over 10 million chips.

Meanwhile, Marchese found his opportunity to chip up, doubling through Rast to leave the start of day chip leader as the short stack. Rast exited in third plac, setting up a heads-up battle with two of the young wizards of the poker battling heads-up for the Alpha8 title.

The pair played at breakneck speed, pressuring one another with three and four-bets. The back and forth battle culminated in a five bet all-in shove from Lichtenberger, who had battled back from the short stack to take a slight lead. Marchese called all-in for his tournament life holding pocket eights and he was up against Lichtenberger’s two suited overcards.

Lichtenberger managed to flop his flush draw and turn his flush to claim the Alpha8 crown and the $2 million payday and, htis time, it is Marchese who has to settle for second place. For a player like Lichtenberger, who has had so many close calls in this very tournament series, it was a well-deserved win that cements his place in Alpha8 history as its first-ever Las Vegas champion.

Here are the final table results from the Bellagio $100,000 Alpha8 final table: