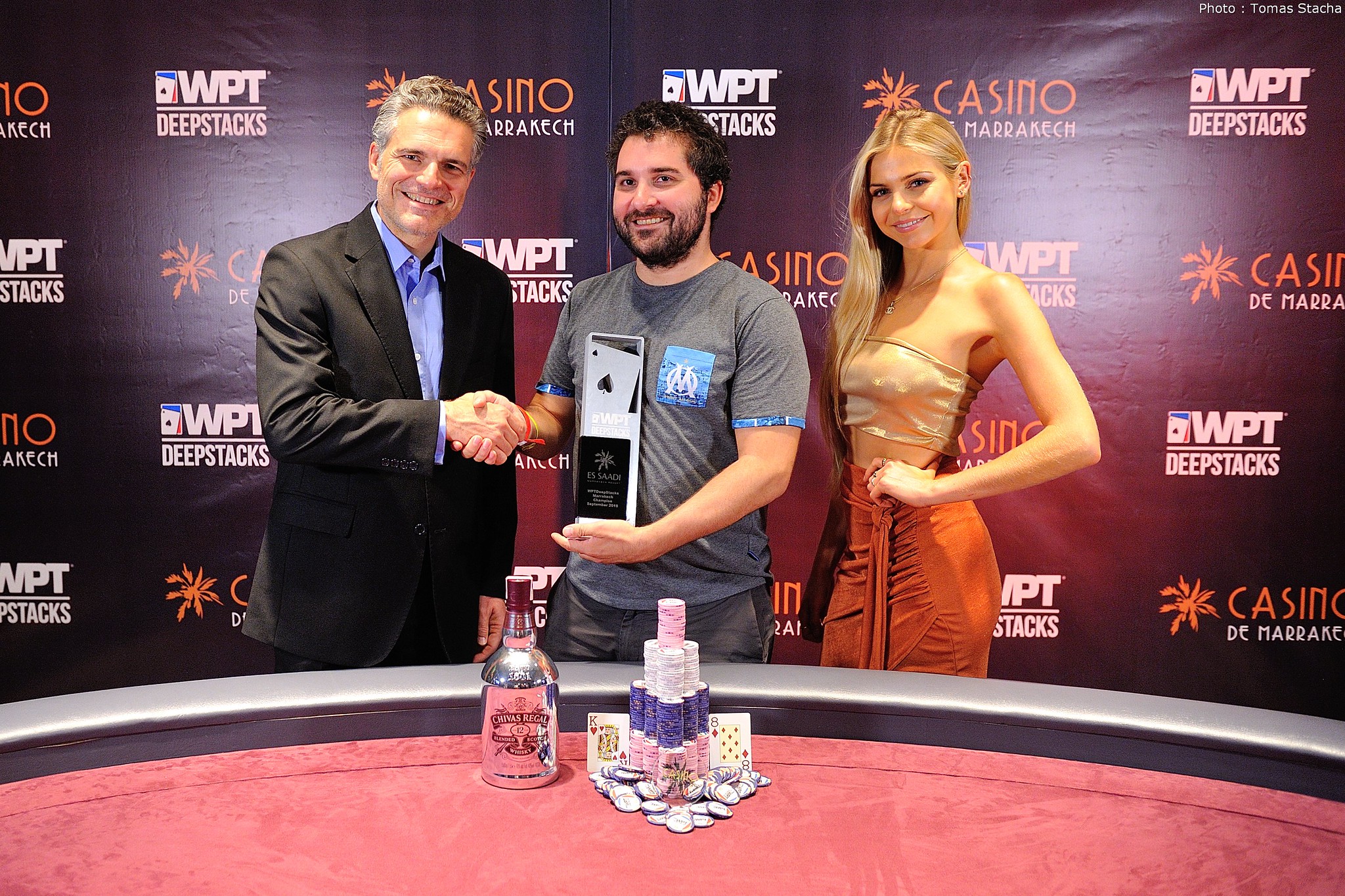 The second-ever WPTDeepStacks Europe Marrakech Main Event has crowned a champion and it is Francois Tosques that follows into the footsteps of fellow countryman Smain Mamouni, who took home the trophy to France in the previous year. Tosques defeated Morocco’s Jaouad Abida in a short and action-paced heads-up to become the latest winner of the popular mid-stakes tour, much to the delight of his boisterous rail that included Alexandre de Zutter and Yves Holland, amongst others.

“It’s crazy, because I was short-stacked most of the tournament. I never expected to win this, this is very crazy. I finished second in a big tournament two and a half months ago, when I was in heads-up I just wanted to win it,” Tosques said in the interview with WPT Royal Flush Crew member Alexandra Gray.

Indeed it wasn’t an easy ride for the Frenchman at all during the final day, as he was among the shorter stacks with 16 hopefuls remaining. Tosques scored an early double to gain some room for moves and won a flip with king-queen against the pocket nines of eventual third-place finisher Fabio Pinho Damaso soon after. That’s when things clicked for Tosques, who immediately said “now for the win” even before raking in the pot.

On the final table, Tosques scored another vital double with queen-jack suited against the ace-king of runner-up Jouad Abida. Tosques flopped a straight and flush draw, turned the straight and rivered the flush for good measure. From there on out, he seemed unstoppable and dominated the action the tables on the road to victory.

“It is very nice to play here, his place is just very good. A lot of space, you have food here, everything. The buffet is very convenient. This was actually the first time playing this tournament,” Tosques added when asked about his impressions of the Casino de Marrakech and Es Saadi Resort. 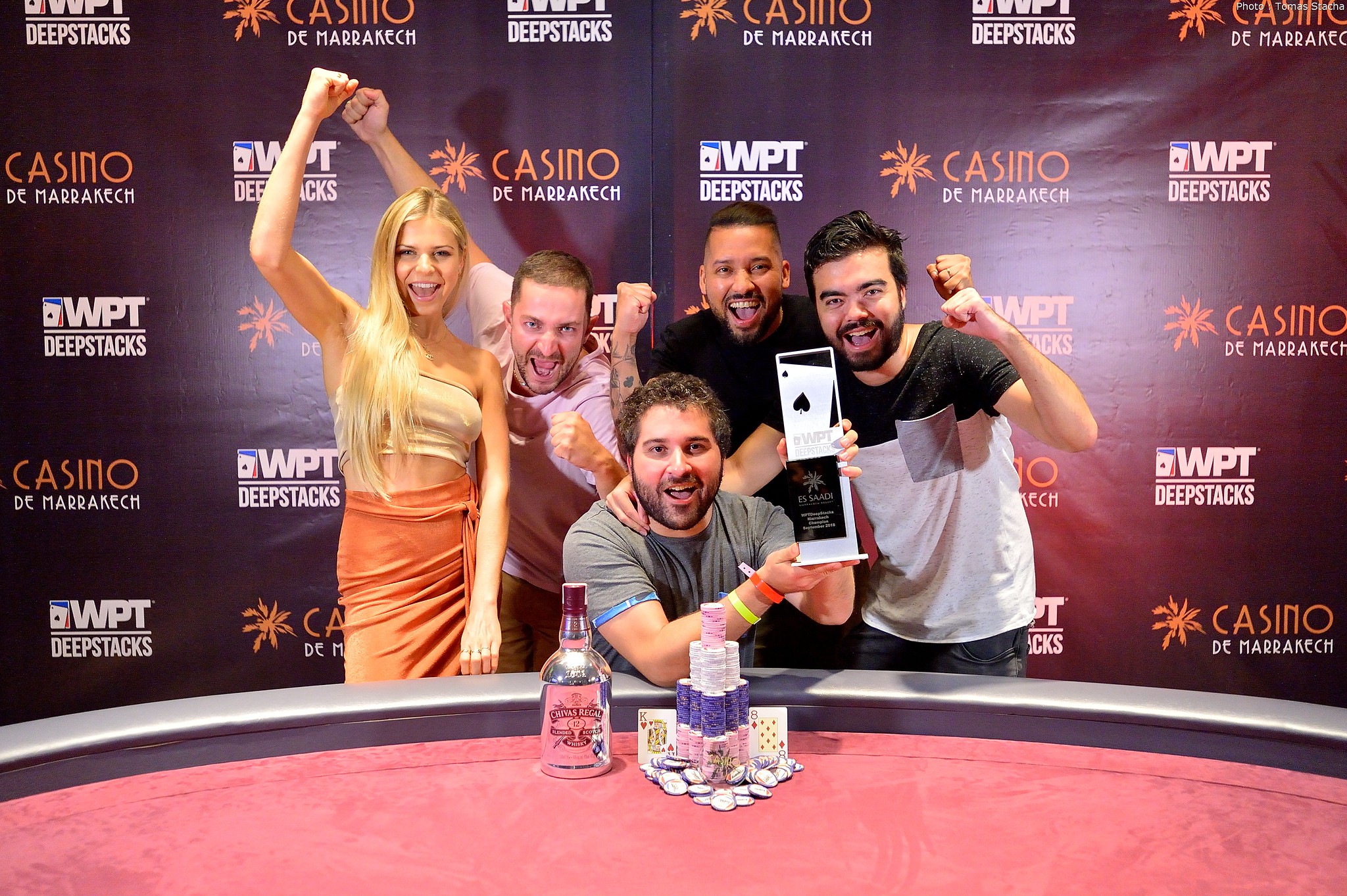 The WPTDeepStacks Marrakech Season 2018-2019 13,200 Main Event (~€1,200) attracted a field of 431 entries to create a prize pool of more than 4.9 million Moroccan Dirhams (MAD). Last year’s field of 433, which set an attendance record for a WPTDeepStacks Main Event outside of the United States back then, was narrowly missed. WPTDeepStacks Johannesburg holds the current record with 456 entries, set only weeks after the inaugural event of the WPTDeepStacks Europe event in Marrakech in October 2017.

The vast majority of the participants hailed from Spain, France and Morocco and it was WPT Champions Club member Guillaume Darcourt that ended up as the bubble boy mid-way through to Day 2. Former professional football player Jimmy Kebe, Slimane Mameche and WPTDeepStacks Portugal champion Jimmy Livramento were among those to take home a portion of the prize pool before bagging and tagging for the night.

Only 16 players were left in contention for the final day and that also included WPTDeepStacks Europe Season 2017-2018 Player of the Year Tobias Peters, Jean Montury, Mathieu Papineau and Kalidou Sow. Peters missed out on the final table and had to settle for 11th place. Things were looking grim for France when the next six casualties were all sporting the Tricolore. However, Tosques came to the rescue and eventually emerged victorious to score his second-biggest result of the poker career so far.

The WPTDeepStacks Europe tour will be heading to the Emperors Palace Hotel Casino in Johannesburg, South Africa, next in October 2018. Further stops in the current year include WPTDeepStacks Brussels in November and WPTDeepStacks Deauville in December, where players can earn vital points for the Player of the Year ranking.