Grinder Is Going For It 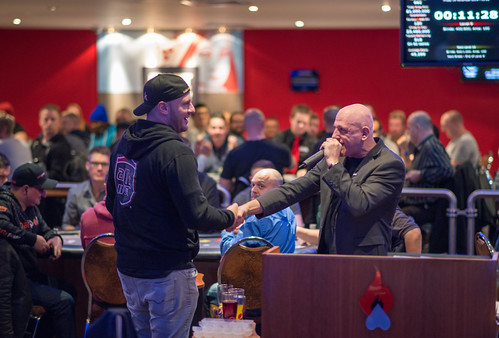 The last player to join the party before the dinner break is a pretty impressive one. With three WSOP bracelets, two WPT titles and two Poker Players Championship victories in just three years, Michael ‘The Grinder’ Mizrachi (pictured, above) is a great player.  Since he sat down, with three hands to go before dinner, he has played two hands – and won big in them both.

In his first hand, Mizrachi got all the chips into the middle with [AdJd] on a two-diamond flop against pocket nines, and spiked a diamond to bust his opponent. Instant double-up. In the next hand, he folded. Cue the photographers, and growing rail.  final hand before the break, he gets to another raised flop of [4h2d8d].

Again, Mizrachi gets it all into the middle, this time with [4s2c] against a player with [AdJd]. The Grinder gets the right side of it again, holding with two pair to eliminate another and mean he trebles his stack in three hands before the break, rocketing to nearly double average.