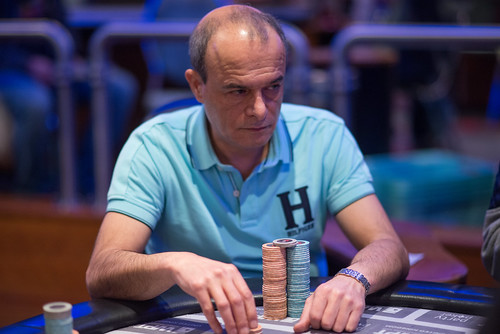 Hamid alone calls Eleanor’s raise pre-flop, to 2million. The flop comes [7c3dKc] and Hamid again calls Eleanor’s c-bet of 2million. the turn of [5c] stokes the fire, with Hamid announcing that he’s "all-in". Eleanor briefly checks her cards, then calls, turning over [5d5c] for the turned set of fives, way ahead of Hamid’s pair of sevens with [Ad7d]. the [8h on the river ends his hopes in this WPT500, and sends us heads-up.

Hamid Rowshaenei has played some superb stuff here this weekend, but he is our third place finisher, going home with £55,000.