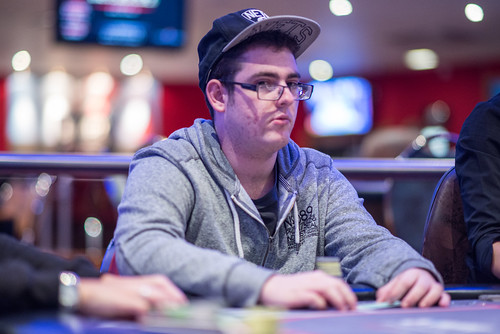 "Money saved is money earned" as the phrase goes in poker, but sometimes, it’s worth risking a lot to win a lot.

The latest fun hand here at the Dusk til Dawn club in Nottingham started with a raise pre-flop by Emran Hussain, to 800. Emran gets four callers, inlcuding Paul Hardy, who not just  Emran’s post-flop bet of 1,000 after seeing [6dKh7d], but the subsequent raise to 2,800 by Alex Goulder. Hussain calls too, and we go three-way to the turn of [Ks]. Goulder and Hardy both check, but Hussain fores in the lot, his remaining 6,875 chips. Goulder passes, but Paul Hardy calls it off from his monster stack.

The river of [4c] dodges the eight outs that would have given Hardy the straight, and Emran doubles up and more to 25,300. Hardy is still one of the biggest stacks in the room on 61,700.

Our chip-leader here as Level 6 is due to start is Alan Jacobson (pictured above) on 70,000, more than double his starting stack.