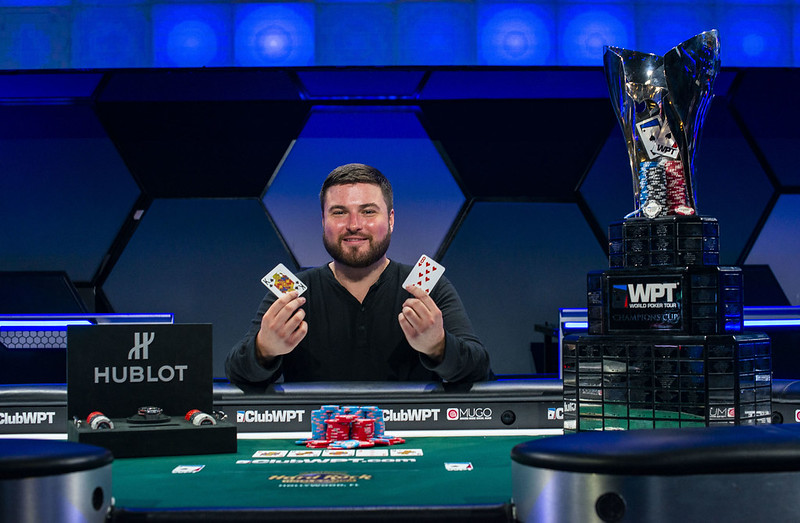 James Carroll was a man on a mission. Entering a final table appearance in the WPT Seminole Hard Rock Poker Showdown as chip leader, he may have been overshadowed a bit by Maria Ho’s quest for a WPT title. Eric Afriat also garnered plenty of attention, attempting an historic second win in the same event he won five years ago.

Along with the $715,175 in first-place money, the 32-year-old originally from the Boston area adds his name to the Champions Cup for a second time and wins a $15,000 entry into the Baccarat Crystal WPT Tournament of Champions, which kicks off on Saturday, June 1. The finish also vaulted him into third place in the Hublot Player of the Year standings – rewarding him with $2,500 in credits for WPT buy-ins next season.

After finishing runner-up, Afriat took home $465,120 for his efforts and came just short of his third WPT title and a chance to make history as the only person to have won the same event twice.

“He’s very tricky,” Carroll said of Afriat. “He’s won two of these before…so he’s doing a whole lot of things right. I’ve probably only played with him three or four hours total before the final table, so from what I’ve seen he’s very good.”

“This one is actually somewhat sweeter,” he said, comparing his two titles. “The first one felt good, but I’ve been through some super tough times for the past five years, so this feels good.”

Carroll came close to a televised final table in March, when he finished seventh at the WPT L.A. Poker Classic for $155,900. After being second in chips with nine players left, however, that finish left him disappointed. The Seminole Hard Rock title allowed for a bit of personal redemption.

“It’s nice, but it’s not my style,” he said. “I don’t really like it that much. I’d rather be off in a corner with five people watching. But it was fun.”

After this big win to start the summer, Carroll now has a chance to complete a nice double – a WPT title and a World Series of Poker bracelet. He plans to play six days a week at the Rio and the big win here certainly gives him a boost for a big summer of poker.

With the score at Luxor, Carroll now says he’ll sell less action for the WSOP and have a bigger stake in himself. However, that series will have to wait. The Baccarat Crystal WPT Tournament of Champions gets underway on Saturday and he’ll certainly be among the field.

“It’s a fantastic tournament, and there’s so much added,” he says. “I’m really looking forward to that.”

With the run he’s on, Carroll may be looking to make it an even bigger summer – don’t bet against him.