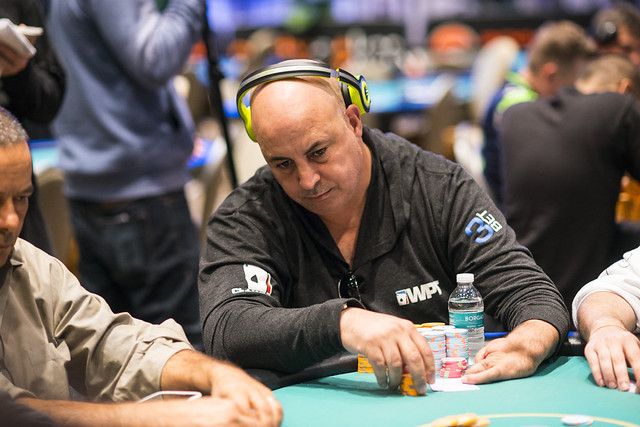 Coutrolis goes into the tank, and he starts by talking a little bit to Qartomy, and then talks to himself for a little bit. Then Coutroulis starts recapping the action in the hand to himself.

Eventually, Coutroulis says, "I call," and he starts moving all of his chips forward as a bet. Qartomy asks, "Did you call, or move all in?" The dealer says, "He said, ‘Call.’"

Coutroulis says, "It doesn’t matter. We’ll be all in anyway."

As the dealer pulls in the bets, Coutroulis moves all in blind for another 150K or so, and Qartomy calls blind.

The turn is the [Js], and they show their cards. Coutroulis reveals [AcKh] for top two pair, but Qartomy turns over [QcQd] for a set of queens. Coutroulis needs an ace or a king to win, or a 10 to chop the pot with a straight on the board.

The river card is the [7c], and Qartomy wins the pot with his set of queens to eliminate Coutroulis from the tournament.

After the hand, Jake Vo points out that if he had checked the flop, the hand would’ve played very differently, as both players would have been vulnerable with a four-card straight on the board.