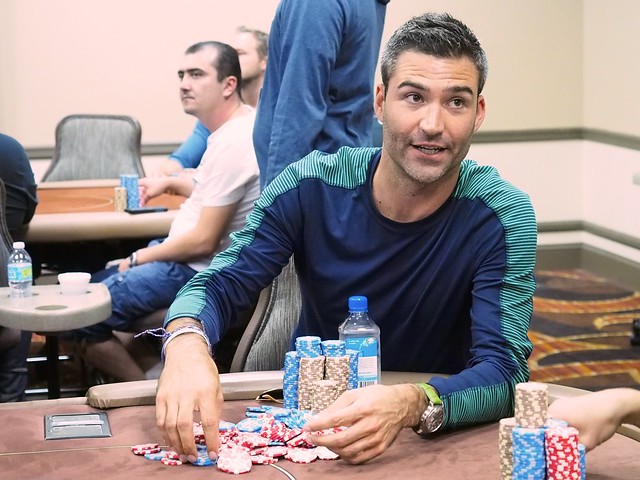 After an action-packed Day 4, the final table of the Legends of Poker Main Event is set. Headlining the action is Jeremy Kottler (pictured above), who is making his third final table appearance in as many seasons seeking his first WPT title.

Kottler had a busy day at the tables, getting involved in a ton of giant pots. He jumped to the top of the counts early in the action, eliminating Huy Lam in 16th place. Later, he took a big chunk of Tyler Kenney’s stack in a big pot where he turned two pair to Kenney’s top pair. The late stages of play were a little tough for Kottler though, as he doubled up Massoud Eskandari with pocket queens to Eskandari’s pocket kings. He’ll be the short stack when final table play begins, but he’ll have experience on his side, as he is the only player who has played in front of the WPT cameras before.

Eskandari, on the other hand, will have plenty of chips to work at the final table. At one point today after losing a big pot to Kottler, Eskandari was down to just 190,000, but he didn’t just rally, he ended the day as chip leader. It is a pretty fitting result for a guy whose friends call him CBK–Comeback Kid.

Joining them in the final table line-up are a pair of young poker pros by the name of Tyler, Tyler Cornell and Tyler Kenney. There is a third youngster with an online poker pedigree in the mix too, Taylor McFarland. Rounding out the final six is Bicycle Casino regular Harut Arutyunyan.

When Day 4 play began, there were 16 players left in the field, including two past Champions, Andy Frankenberger and Keven Stammen. Both of the winners had a chance at WPT history today, but came up a little short. Frankenberger, who won this event in Season X, was looking to become the first player to win the same WPT event twice. Stammen was looking for back-to-back titles and a chance at becoming the first reigning WPT World Champion to make a televised final table.

Neither were able to reach their goals though. Frankenberger exited in 10th place. Stammen was knocked down to just five big blinds at one point and managed to put together an impressive rally, but he missed out on the final table, finishing in eighth place.

Here are the chip counts and seat assignments for the Legends of Poker final table: