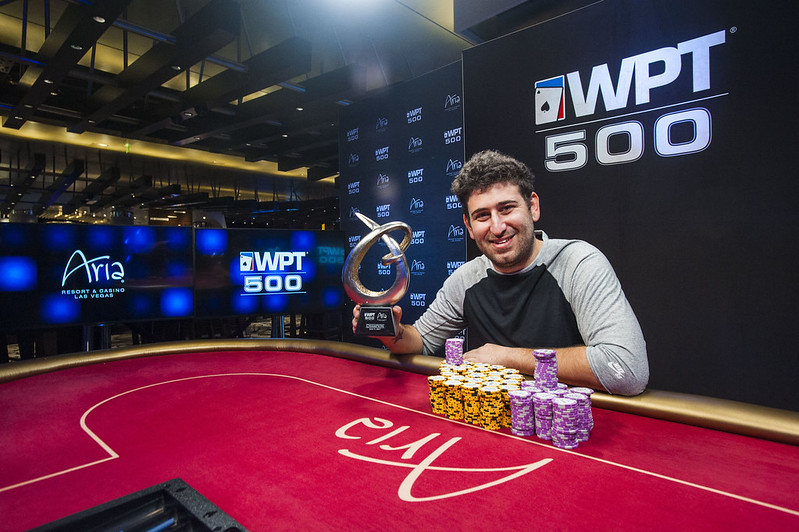 It’s never easy to rise to the top of a poker tournament, and that’s especially true when 3,541 entries are involved. But Jon Borenstein (pictured) made it look easy on the final day of the WPT500 Las Vegas at ARIA Resort & Casino en route to claiming the $230,000 top prize. Despite getting low on chips during a crazy start to the final day, Borenstein was able to storm back and come out on top.

The hand Borenstein reference was a three-way, all-in clash on the first pitch of the cards. Borenstein had his stack crushed, but at least he was still alive, unlike Christopher Bonita, who was eliminated on the hand in ninth place. It was this hand that set the pace for the final table, and the field was quickly down to four players in the first 20 hands.

“It went from nine-handed down to four-handed in less than an hour, and yeah it was pretty quick,” Borenstein added. “It was fun, very fun.”

Borenstein scored a double up to get enough chips to get out of the danger zone, and then he advanced to three-handed play before his second all-in confrontation at the final table gave him the chip lead at exactly the right time.

“Those are breaks that you need to get to win a tournament that I haven’t been able to get recently, and I got one,” Borenstein said. “I got kings in versus ace-king, your standard cooler spot. I’m just happy to be on the right side of it, and I’m feeling really happy.”

Play continued for one hand after Borenstein took the lead, and then the final three players decided on the terms of a deal that made Borenstein the WPT500 Las Vegas champion. Borenstein was all smiles after that, and you could see that he was excited in his winner interview at the conclusion of play.

Borenstein was the chip leader at the end of play from the first starting flight, but he wasn’t even quite sure that he was going to play in this event. He found himself looking for a tournament to play, and WPT500 Las Vegas was in the right place at the right time.

“I actually wasn’t even going to play in this tournament,”Borentsein said with a smile. “I busted a tournament from the WSOP really early, and I was looking for something to do, and to play. I saw this on Twitter and I came over and I ended up bagging the chip lead on 1a after one bullet. And so, I mean, it was only logical that this is where I would end up after that.”

Not only did Borenstein make the right initial decision to play in WPT500 Las Vegas, he made all the right decisions as he was playing in the tournament as well.

“I have a lot of experience in these lower buy-in, quicker structures, so I was pretty comfortable, but I just had a plan coming in, and I just executed that plan, and everybody else kind of did their own thing, and I’m not mad at them for it,” said Borenstein.

At the start of the final table, Borenstein was lumped in the middle of the pack with a group of others, and it was Adda52.com player Nikita Luther with the big lead.

The first elimination of the day came on the very first hand of play at the final table. Bonita and Aleksander Gorman got it all in against Jon Borenstein. When they flipped the cards over, Gofman held the lead with pocket aces, Borenstein had pocket jacks, and Bonita needed some help with the

, and Bonita was eliminated in ninth place. Gofman more than doubled up to survive, and Borenstein became the short stack at the table.

Borenstein was able to double through Scott Montgomery on the very next hand when his pocket fours held up against Montgomery’s pocket threes.

The next elimination came on Hand #13. Antonio Scalzi was all in preflop with pocket deuces, and Scott Montgomery had him covered holding the

. The board gave Montgomery a flush, and the Italian exited the tournament in eighth place.

One hand later, there was another three-way all-in pot, which had become something of a habit in this tournament. This time it was Joep Raemaekers who had two players covered. He held the

and covered Borenstein with the

and Nipun Java with the

. The board gave Borenstein a king, and he tripled up to survive. Raemaekers won the side pot against Java, who hit the rail in seventh place.

A few hands later, Raemaekers scored a huge double up against Luther when his

Soon after winning the biggest pot of the tournament up to that point, Raemaekers had Brian Gorman covered in a preflop all-in on Hand #19. Raemaekers was ahead with pocket kings over Gorman’s

, and the kings held to send Gorman home in sixth place.

One hand later, Raemaekers continued his hot streak. Luther moved all in preflop, and Raemaekers quickly shoved all in over the top, so she was at risk for her tournament life. Raemaekers held the

of Luther, and the board ran out

. The Adda52.com Team Pro was eliminated in fifth place after her deep run in this massive field.

Four-handed play would prove to be the longest period of play at the final table. Things calmed down a little after the lightning-fast start, but it took just over 20 hands of play before there was another all-in confrontation. Montgomery got all in against Raemaekers preflop on Hand #41. Montgomery held the [Ad8c[/pc], but he ran right into a cooler in the form of pocket kings held by Raemaekers.

The final three players then advanced to Hand #47 before there was another pot that caused a seismic shift in the chip standings.

. Raemaekers turned over the

, and Borenstein needed his hand to hold to stay alive. The board came

, and the pocket kings held up for Borenstein to win the pot and double up to take the chip lead.

The final three players then played one more hand, and action was paused. After Hand #48, the players took an extended break to discuss a deal, and they eventually came to an agreement that awarded Borenstein the winner, as he was the chip leader at the time. Borenstein took home the lion’s share of the prize pool and the WPT500 Las Vegas trophy. Raemaekers finished in second place, and Gofman took third.

That concludes the World Poker Tour’s coverage of WPT500 Las Vegas. Thanks to ARIA Resort & Casino for hosting another great event here on the Las Vegas Strip. The next stop on the tour will take the WPT to Choctaw Casino Resort in Durant, Oklahoma, for the WPT Choctaw Main Event from August 4-8. The WPT coverage team will be there to bring you all of the poker action from this $3,700 buy-in, $2 million guaranteed tournament.