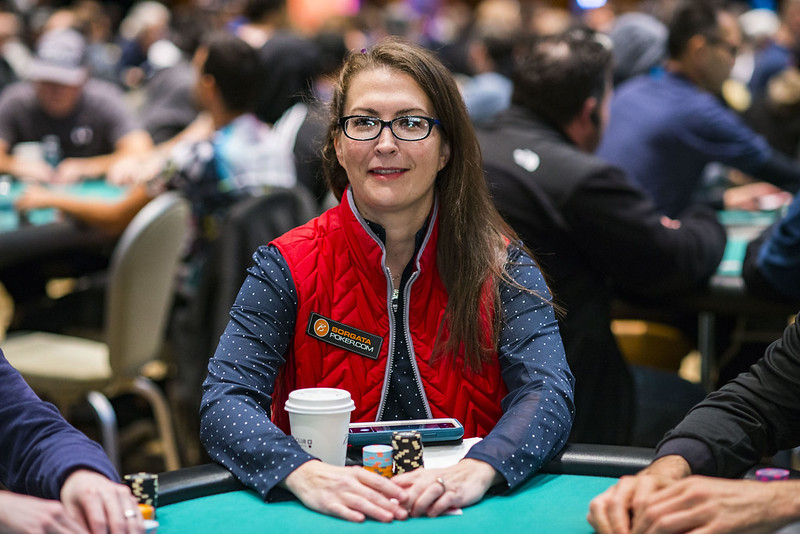 Between hands at the WPT Borgata Winter Poker Open Katie Stone takes another peek at her phone. She’s not texting friends or checking Twitter. The Borgata Poker ambassador is not only playing live on Day 1A in the championship event, but also involved in a freeroll online at BorgataPoker.com.

The winner in that event earns an entry into a $320 tournament at BorgataPoker.com with a $250,000 guarantee. That’s the largest guarantee the site has had at that price point and is set for March. The top 300 in the online event earned a free spot in the field and Stone was running deep and hoping to snag an entry.

Winning entries into bigger events have become the norm for Stone this week at the Borgata. On Saturday, she won a Charity Series of Poker tournament benefiting St. Jude Children’s Research Hospital, giving her a free entry into the WPT Championship event.

“It’s always a lot of fun to play a not-so-serious tournament, something where you are just there with your friends and you know that it’s for a good cause and everyone is drinking and having a good time,” she said at the second break in the action. “I think that those kinds of events are good for poker.”

Stone cashed in this event last season, taking 80th for $9,301, and is hoping to improve on that this year. Through the first part of the BWPO, Stone has several cashes, but hoping for that first really deep run.

“I didn’t cash in the opener, but I cashed in about every other event that I’ve played so far,” she said. “So that’s good.”

Married to poker player Joe Cappuccio, the couple has a 3-year-old son and can be found online most nights playing in New Jersey’s legalized online market. Pennsylvania recently became the fourth state offering legal online poker in the U.S. along with the Garden State, Nevada, and Delaware. Michigan and West Virginia have also approved online gaming, including poker.

Other states have also made some efforts at moving toward legalized online poker. Borgata partners with partypoker in New Jersey to operate its platform. Stone believes there is now some hope for growth in the legal online poker market in the U.S. Pennsylvania numbers have been good in just a few months and New Jersey showed an upward trend in December after months of stagnation.

“I am very encouraged by what I see in the online poker landscape and the things that I’m hearing,” she says. “I don’t know anything specific about which states are up next or shared liquidity or anything like that. But what from what I’m seeing I just think that things are going to work out just a little bit better than everybody’s thinking.”

Stone noted that MGM recently launched the East Coast Poker Tour with events at Borgata, MGM National Harbor in Maryland, and MGM Springfield in Massachusetts. The events feature some mid-range buy-ins and Stone believes there will be more tie-ins down the line with BorgataPoker.com.

“I’m excited,” she said. “I think Borgata and MGM are going to be a bright light in the online poker industry.”

Just after the second break, the nice run continued for Stone. She won that $320 seat and was still alive in the Day 1A field. She’s hoping that success online is a sign of even better things to come.