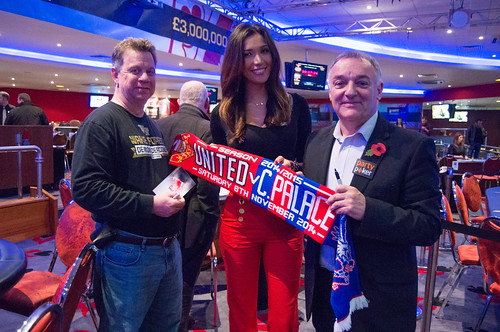 If there’s one enduring image from the 1977 F.A.Cup Final it’s the sight of Manchester United legend Lou Macari wheeling away in triuph after breaking Liverpool supporters’ hearts, scoring the winner and securing more silverware for his beloved United.

Along with Arthur Albiston, the former Red Devil is flying high at the WPT-500 here in Nottingham now after winning a terrific hand.

Joining the action on a board of [2d4d7s5h], Macari makes it 1,000 to go from the hijack position. Oliver Caplan raises to 3,200, and gets a call from Richard Pipe as well as Lou, making a juicy pot. But on the river, it gets even bigger. The [2c] pairs the board, and both Pipe and Macari check. Oliver puts in a chunky 7,000 bet, but that’s called by both Pipe and Macari! Sensational hands on their backs…

Don’t they know he scored the winner in ’77? Amazingly, this is Macari’s first game of poker, possibly explaining the call not raise on the river, but house over house over house? Amazing.