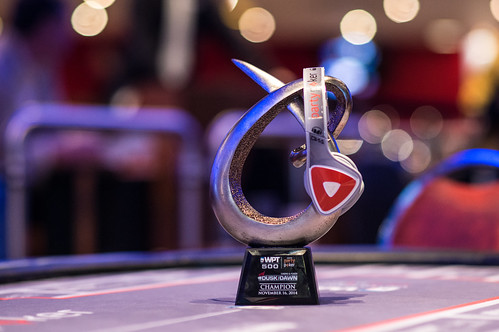 With just eight players remaining, Matthew Noonan leads the way, with almost a third of the chips in play here in Nottingham for the WPT500 final table.

Can he see it out and take down the biggest title of his live poker career, winning the beautiful WPT500 trophy and Monster headphones?

Here are the players, and their seats:

Aged 65, Habib is the short-stack from Leicester. His biggest previous cash was for $18,000 in 1996, so he’s guaranteed to beat that if he can survive the first bust-out. He’s never even entered a WPT event before, and got into poker when he "stopped [playing] black jack"! His favourite hand is 3-6 suited, and he is the self-confessed ‘quiet guy’ at the table.

James hails from South Africa and has previously won GPS Sheffield and finished 4th in a WSOP Event in Africa back in 2012 for over $55,000, so won’t be daunted by playing under the lights here in Nottingham’s stunning Dusk Till Dawn.  He loves to play J-9 and his lucky number is seven, but is superstitious about never playing with white poker chips at the table, and his favourite movie is The Shining. Will it be a case of ‘Here’s James!’ come the heads-up?

The 63-year-old from Newcastle is thrilled to be playing at the final table, having previously done very well at them, winning back-to-back in Sheffield a while back. He’s been a Geotechnical Consultant for over 35 years, so clearly has the worldly smarts to put his opponents to a decision for all of their chips!

Matthew told us that he’s hugely excited to be chip leader heading into the final table. the pro has performed miracles to get back into the tournament, but now has all the momentum.

"I wouldn’t say nervous, I just want to win. I don’t want to make any mistakes….I haven’t yet!"

If he can win it, it would be Matthew’s biggest win of his career to date.

Derek is from Las Vegas and has previously won the Seniors Event at the Bellagio. Having played poker for a decade, he came into the game on the back of the Moneymaker era, and tells us that he "just got unlucky" to get started in the game!

The PKR Pro, who is from nearby Leicester, turned pro eighteen months ago, but has been sponsored since March this year. Coming into play second in chips, she hopes to go one better than her position and previously finsihed third at the UKIPT High Roller and has reached the WSOP Ladies Event final table in 2012. Interestingly, Eleanor taught her Dad to play recently… and he went on to win the WPT-National Event in Milton Keynes!

A builder by trade, Hussain came into this game by qualifying through a Mad Marty Wilson game back in Bridgenorth, and this is his first time playing anything of this scale. His favourite poker player is Tony G (so you can imagine a % of the winnings might go on a miniature bike) and his favourite hand is Jack-ten of clubs!

Richard won his seat via the £125 Grand Prix right here at DTD, and has been playing the game for five years. The Bradford-based player knows the club, the staff and the tables…but can he win the £140,000? We shall see.

A reminder of the pay-outs: