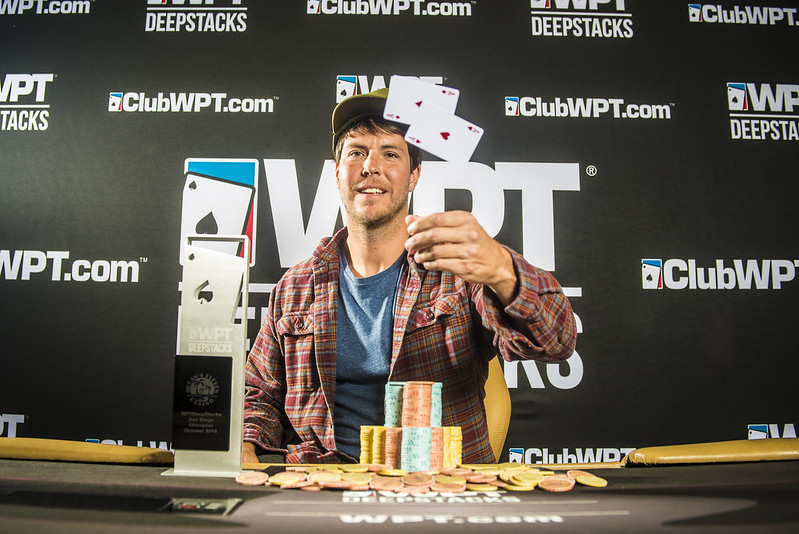 Maxwell Young (pictured) topped a field of 283 entries to win the Season 5 WPTDeepStacks San Diego Main Event on Monday at Ocean’s Eleven Casino. The professional poker player earned his first WPTDeepStacks title, and $63,215 in first-place prize money, which included a $3,000 championship prize package. This is one of the biggest wins of Young’s poker career, and his career earnings now stand at $877,079.

“I’m feeling great. I play full-time, and the beginning of the year was great for me, and I basically hit a downswing at the start of the summer, and I’ve just been battling to break even for the last few months, and this does it, I’m happy,” said Young right after the victory.

“I was in town for my friend Nolan Plant’s bachelor party, and then I visited a good friend Dan O’Hara down in San Diego and did some surfing with him, and visited another friend Andrew Varis. I’m just hanging out and having fun on my days off, and surfing when the waves are good,” said Young when he was asked about what brought him down here besides the poker tournament.

“I have a pretty solid schedule set up where I have a few days off, but I’m playing pretty much non-stop,” said Young about his upcoming poker plans.

He finished the interview by saying, “I will try to play another WPTDeepStacks event this year. I like them a lot, they’re right in my buy-in range, the structures are great. They have multiple starting days, multiple opportunities. It’s worth traveling for, because a lot people think that you go and it’s just one tournament, I don’t want to travel for one tournament. But when you have three or four starting days for one tournament, it’s like playing five or six tournaments, so I’m all for it.”

The final table got off to a quick start when Eric Jefferies busted in eighth place during the first level of play, and things really picked up during the second level. Daniel Strelitz saw his bid to become the first player to win a Main Tour and WPTDeepStacks Main Event fall short in seventh place, and then Luke Nguyen went out in sixth place a short time later.

The third level of play was particularly intense, with Shivan Abdine (fifth), Jonathan Ingalls (fourth), and Adam Demersseman (third) all hitting the trail in quick order. Maxwell Young held the chip lead with 5,550,000 over the 2,945,000 of Frank Kelly, but Kelly scored two double up to flip around the chip stacks exactly, but Young turned the tables once again by picking up a lot of small pots.

On the final hand, Kelly was all in preflop on the button, and Young had him covered. The two remaining players then revealed their cards one last time.

Kelly was eliminated in second place, good for $42,355 thanks to his deep run in the tournament. Young won the hand and the tournament, and he took home $63,215. He also received the WPTDeepStacks trophy, and his prize money includes a $3,000 championship prize package.

That concludes our coverage from WPTDeepStacks San Diego. Thanks to Ocean’s Eleven Casino for hosting another great stop on the tour.

Up Next for WPTDeepStacks in North America

The next stop for Season 5 of the WPTDeepStacks schedule is WPTDeepStacks Pittsburgh. The Main Event runs from October 25-29 at Rivers Casino in Pittsburgh, Pennsylvania.