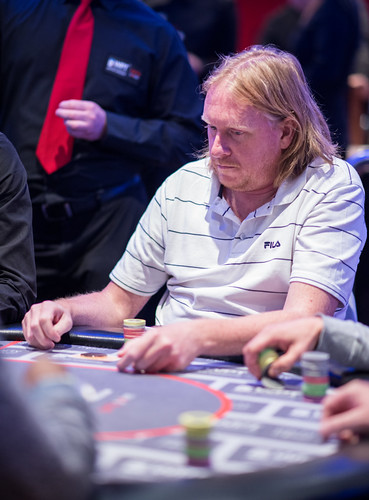 Paul Murrell bets out 3,500 on a board of [6hKd3c4s] and is called by his only adversary in the pot, Leo McClean.

The river comes [7h] and McClean leads from early position, 8,600 into an 11,000 pot. Murrell mulls over his options, eventually calls it off.  McClean flips over [5c6c] and Murrell grimces, handing over the cash.  An expensive pot to lose, but what a one to win for Leo, putting him around the Day 1C chip-lead.

89 players remain from 103 entries so far today, with overall tournament numbers in this million-pound-guaranteed event now up to 417.  Are you coming later this week? maybe you’re playing today – late registration and re-entry runs until around 8.40pm.