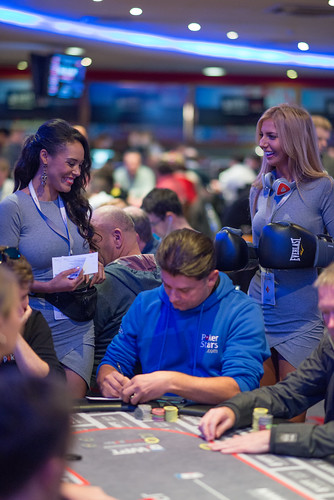 With 370 entries, we only have 200 players remaining here on Day 1E at Dusk til Dawn’s for the WPT500 Nottingham.

We’ve obviously lost some really good players, so we caught up with them to hear about their bad beat stories how they were unlucky to depart.

Renee Xie was running on empty before dinner, and she came up needing to double. Unfortunately, she didn’t get that when she shoved her [QcTc] into her opponent’s pocket sevens, which held. Renee will be back tomorrow, but may be playing the WPT Main Event satellite tonight at DTD, which is great value – £150 entry and two seats guaranteed if they get just ten runners. Generous!

Rahul Sachdev busted when his pocket jacks were outdrawn by [AsTc] of his opponent, a flopped ace meaning Rahul has to settle for a seat in the juicy cash games running all week here at Dusk til Dawn.

Everyone else who has busted has probably been int he partypoker Players’ Lounge at some point this evening, where a legendary game of killer pool took place. There’s also darts, speed 8-Ball and loads more to tempt in our party qualifiers and WPT500 players in general!   Players have also been buying up raffle tickets in aid of Emmanuel House here at the tables, ably assisted by the partypoker hostesses (pictured). The money raised will help those less fortunate in the local area in all areas of their lives, so if you’re at the tables, give generously and you could win some amazing prizes!