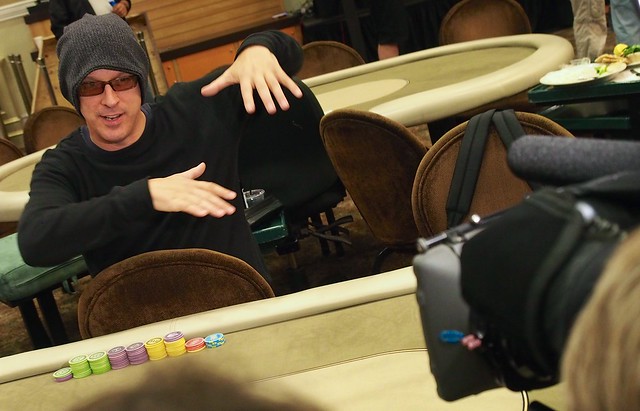 Photo: Phil Laak was interviewed during a break yesterday by the WPT television cameras.

With the final board showing [AcJdJs7h4d] and about 20,000 already in the pot, WPT Champions Club member Phil Laak bets 17,800 from the hijack, leaving himself just 26,400 behind.

Greg Gliner moves all in from the button for about 50,000, covering Laak, who goes into the tank. As he often does, Laak talks himself thru the hand and thru his options.

At one point, Laak asks Gliner the classic line, "If I fold, will you show?" Gliner pauses for a moment and says, "No." Laak then turns to the dealer and asks, "If I call, do I have to show?" The dealer nods and indicates that it’s an all-in situation, so both players are required to show their cards.

Laak continues tanking, and says, "There’s a 7% chance I’m slow-rolling you. I don’t think I can fold this."

Laak then starts considering external factors. "What’s the traffic like right now? What time is it?" Somebody points out that it’s about 1:30 pm, and Laak says traffic shouldn’t be too bad, so he should have a nice drive home if he busts.

Laak then returns his attention to the hand, theorizing out loud that it’s possible that Gliner has A-K, and effectively turned it into a bluff at this stage of the hand. Gliner says nothing.

Laak eventually calls, and Gliner turns over [AdAs] for the second nuts — a flopped full house, aces full of jacks.

Laak tosses his cards face down toward the muck as he leaves the table, but the dealer retrieves his cards and shows them to the table (as she is required to do) — [Jc2c] for trip jacks.