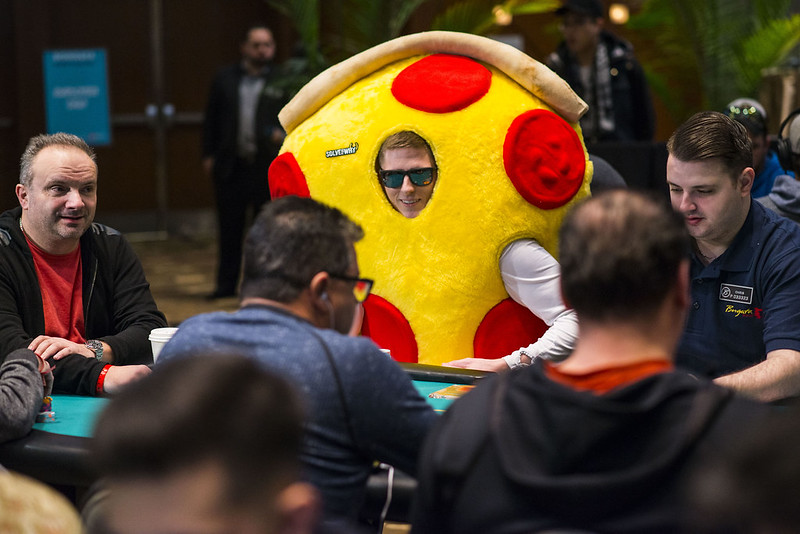 Poker players have been known to be a bit cheesy on occasion, but Brett “The Delivery Man” Butz (pictured) has taken it to a new level here in Day 1b of the Borgata Winter Poker Open. Butz has cast the traditional hoody aside and has instead donned a pepperoni pizza outfit at the tables.

WPT.com caught up with Butz during the third break in the action to get a slice of his life. The 23-year-old from Fairfax, Virginia, has big plans when it comes to pizza. He wants his own a piece of the business pie, and plans on opening several Pizza ATM franchises. The quick-buy pizza delivery kiosks are popular in Europe and offer an easy way to buy a hot pizza or a take-and-bake.

“It’s a pizza vending machine that holds 96 pizzas” he says. “Half of it is refrigerated and the other half has an oven that warms up the pizza. I want to bring that to college campuses all over the East Coast.”

There are currently only a couple machines in the U.S., but Butz hopes to see that number rise if his idea pans out.

“I have a great relationship with the U.S. distributor and we’ve talked about it for a year and a half,” he says. “Now I’m finally making it a reality in August, and the first one will be at George Mason University.”

At Borgata, Butz’s costume sports a Solve for Why Academy patch, the poker training site run by Matt Berkey. The two are friends and Berkey recently spoke with Butz, offering a few crumbs of wisdom.

“We talked about my Pizza ATM idea, and he gave me some amazing tips on the business,” he says. “I wanted to help support him giving me his time, so I put it on the pizza costume.”

Don’t box this pizza-wearing player in, however. He describes himself as just above a recreational player and has bigger plans to add more to the menu.

“Eventually, the goal is to play and do well, and the sponsors can buy the tournament tickets,” he says. “That’s the goal. My company is called That Brand Company, and it’s going to be a main company for other subsidiary companies like That Pizza ATM, That Taco Truck, and That Korean Barbecue Truck.”

At the third break in the action, Butz’s chip stack was a bit thin at only about 30,000 after ordering his second bullet. While his chip stack may have been sliced up a bit, he’s enjoying himself and players don’t appear to be annoyed by his costume.

“It’s not as hot as I thought it would be,” he says. “There’s actually a good amount of space in between so I can breathe a little bit. I was very surprised at the reaction because I thought there was going to be a couple people say something, but they all love it. I think everyone likes adding some personality to poker because everyone’s so serious right now during these tournaments.”

Butz hasn’t played in costumes in any other events and says this is only the beginning. No word if he’ll include other toppings in the future like sausage, hamburger, or even anchovies. A friend owns a fish taco franchise in Maryland, however, and Butz says a taco outfit is a real possibility.

“There’s a lot of opportunity,” he adds.

The ultimate goal this week is to make the final table and pack the pizza costume for a trip to the final table at HyperX Esports Arena at Luxor Hotel and Casino in Las Vegas. His planned enterprise may sound a bit like an episode of Shark Tank, but Butz is adamant his ideas will deliver – pizza and profits.

“Eventually I want to have 20 Pizza ATMs all around the D.C. area, and then work my way up the East Coast,” he says. “It’s all about the dough.”