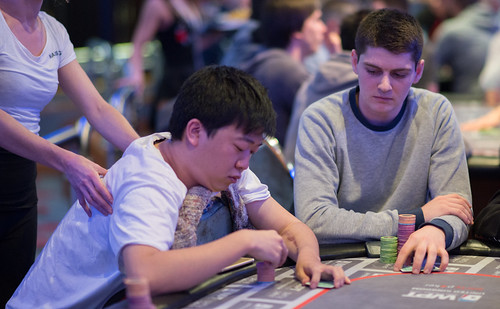 There is always one level which goes insane, that eliminates more players than you expct and sees a massive amount of players either crash and burn or rocket to the top of the leaderboard.

The latter applies to Dahe Liu, who, after leading the chip-counts on Day 1F, has really impressed us today.  He’s up to 1.5 million and cruising along by enjoying a massage.

Elsewhere, former chip leader James Thomson has lost a 450 pot when he called the shove of Mark Gogerty pre-flop.  Gogerty held [8d8s] and James Thomson [KhKc], but four spades on the board meant a big one went Gogerty’s way to preserve his tournament life and damage Thomson’s momentum.