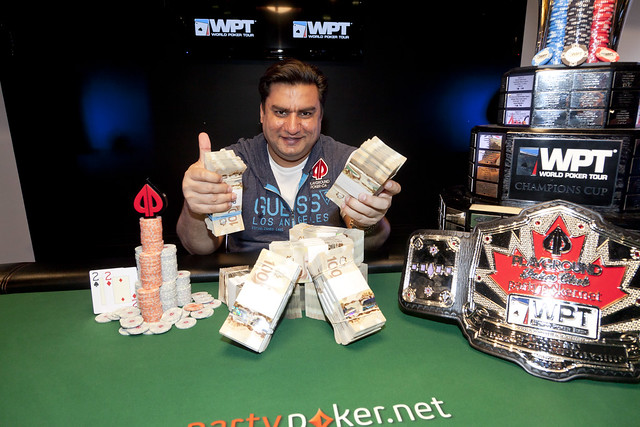 The grueling heads-up battle lasted over three and a half hours and over 100 hands with the chip lead swaying back and forth. In the final few hands, Nasir was able to pull away with the chip lead and finish the job to win the first WPT title of Season XIV, CAD $255,408, a seat into the WPT Championship, a WPT Champions trophy and a Playground Poker Club Champions Belt.

The first stop of the season saw 370 players make their way to Montreal and pony up the CAD $3,500 buy-in, generating just shy of a CAD $1 million prizepool.

Over five days of action, the 370 was trimmed down to the final six, who came back to the Playground Poker Club to battle it out for the title.

It didn’t take long for the action to heat up as WPT Champions Club member Dylan Wilkerson, the most accomplished player at the final table, was eliminated on the first hand of the day when his pocket nines lost a flip against Levi Stevens’ ace-jack.

Zhang eliminated Trevor Delaney in fifth place, which gave Zhang most of the chips in play and a big chip lead over the rest of the field. It was four-handed when Nasir won a tournament changing pot through Zhang.

Nasir got all in on a king-high flop with king-jack and was in bad shape against Zhang’s pocket aces. Nasir found a king on the river to double up, stay alive and take away the chip lead from Zhang. He carried that chip lead to heads-up play, where he defeated Zhang and ensured that the WPT would have to wait at least one more stop before a female open event champion is crowned.