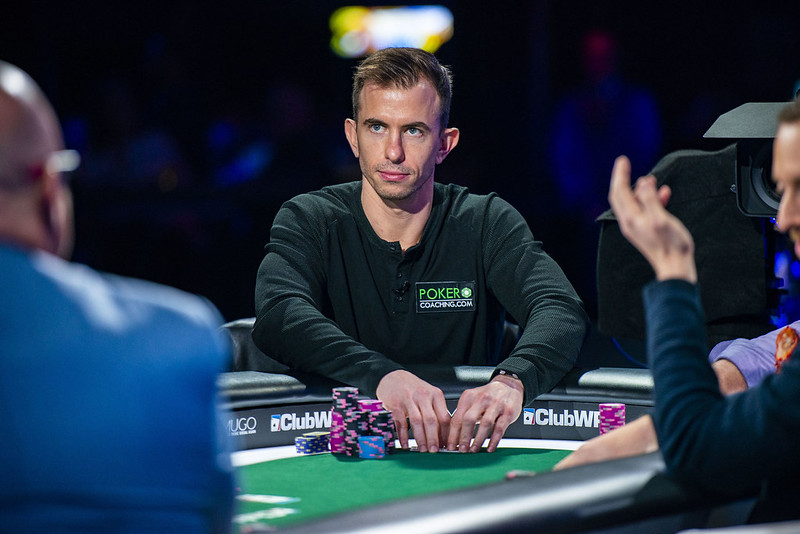 Poker preparation has become a way of life for longtime pro Shannon Shorr. That includes plenty of time in the gym and constantly working on his game and mental approach. Since making the final table of the WPT Gardens Poker Championship in January, he’s ramped that even more, and is serious about turning his spot second in chips into a breakthrough WPT win at HyperX Esports Arena in Las Vegas.

During the two-month break, Shorr has been working with Jonathan Little at PokerCoaching.com to fine-tune his game. He is sporting the site’s patch today and will also be contributing some strategy content to the site in the coming months.

“There’s been a lot of prep, a lot of poker studying, playing, and a lot of physical fitness work and yoga,” he says. “For me, it’s a lifestyle. I do it more for my personal life, but I definitely find it gives me a ton of clarity.

“Since bagging up at the Gardens, I was either watching poker and working on my game. Or, I’m big into personal development and trying to improve my lifestyle. It’s been a constant of trying to move forward.”

He credits Little as a longtime friend and poker mentor. On the WPT, he’s amassed $1.1 million in live tournament winnings, including three final table appearances. His best came in Season XII with a runner-up finish in the Lucky Hearts Poker Open for $190,039.

His other WPT final table appearances came in Season VII in the WPT World Championship (fifth for $408,550) and in Season IX in the Southern Poker Championship (fourth for $144,985). He also has a ninth-place finish and 17 cashes on tour.

Entering the final table, winning is the name of the game and he was feeling confident before cards were in the air.

“It feels great,” he said. “This is a super-fun experience anytime you can make one of these. The reality is these fields are so big, so it’s so hard to make the final six. I’ve done it a handful of time so hopefully, I can win this one.”

The native of Tuscaloosa, Alabama, now lives in Las Vegas and has been playing professionally for 13 years. Along with his WPT scores, Shorr has more than $6.7 million in live tournament winnings.

The consummate poker player, Shorr was back at the tables after his big run at the Gardens and took fifth in a $1,100 Deepstack Extravaganza III event at the Venetian for $47,830.

Shorr’s list of accomplishments runs deep and includes a deep run last summer in the WSOP Main Event – 39th for $189,165. He’s just missing that one WPT or WSOP title to hang his hat on – a little extra prestige for his poker resumé.

“It would be super special to win,” he says. “I haven’t won a major title, but have had a lot of close calls. It would be really cool.”

That possibility is now right in front of him. Shorr enters the final table with 1.7 million in chips and in Seat 1. Chip leader Frank Stepuchin has about 4.1 million and sits in Seat 2. It’s not an enviable position for Shorr.

“You generally don’t want the chip leader to your left, so that’s a bit of a problem,” he says. “I’d prefer it the other way, but I’m prepared and I’ve done a lot of work for I know how to maneuver such a situation.”

Engaged to be married for over a year, Shorr and his fiancée don’t have a date in mind yet for the wedding. A big win here on the WPT might speed that up a bit.

“We are in Las Vegas,” he says laughing. “We could go down to the White Chapel.”

Either way, even sixth-place money of $110,225 will be quite an addition to the wedding fund. Ultimately, he’s hoping to add a new membership to the WPT Champions Club, the Gardens championship belt, and first-place money of $548,825. That would make for quite a honeymoon.