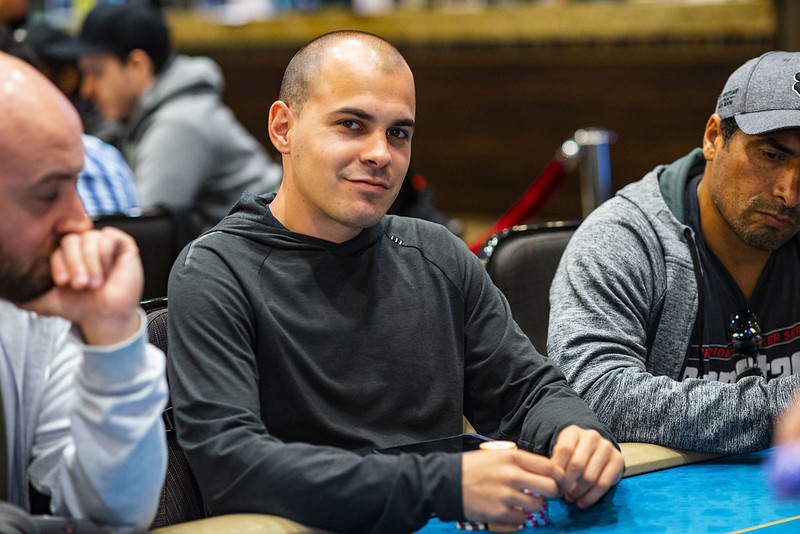 Cord Garcia had some extra incentive on Day 1A at the WPT Gardens Poker Festival. He brings the chip lead into Day 2 with 265,700 and recently posted on Twitter his interest in fielding some action on this season’s events.

Anyone want to make @wpt POY bets slide in. About to get this WPT monkey off my back. Looking for hu whoever scores higher. You gotta bet on yourself. Not letting you come up off me from your couch taking Elias.

“I woke up this morning and since it was a new season I decided that I would entertain some side bets – just one on one, whoever has the most points at the end of the season,” he says. “I wasn’t really interested in sideliners just taking elite players, but I told any player that if he wanted to bet himself, the door is open.”

After bagging the Day 1a chip lead, Garcia said he took a $5,000 wager from Aaron Mermelstein, who started Day 2 at the Gardens with 17,600. The player with the most Hublot Player of the Year points wins the bet.

So far, a few others have contacted Garcia about betting at mutually played events but Garcia was hoping for season-long money.

“I wasn’t looking for a lot of action,” he said. “I just wanted to fire myself up for today and I did that.”

Originally from Katy, Texas, and now living in Los Angeles, Garcia has one World Series of Poker bracelet and $2.7 million in live tournament winnings. He only has three cashes on the WPT and finished second in 2017 at the WPTDeepstacks Championship at Thunder Valley.

Overall, Garcia hasn’t played many WPT events, but plans to play more in Season XVIII. The points total betting adds some extra incentive in those efforts.

“This is probably the tour that I travel the least and I plan to change that,” he says. “This year I want to play around half the stops, maybe more, maybe less. WPT is the one tour that I don’t have a lot of success in but I really want some.

“I made it a personal goal after the summer to focus more on some WPTs. The structure’s great, the tour’s great, the people are great. I like everything about it, but in the past it’s been a little bit bigger than I could play.”

Despite a big start at the Gardens, the 29-year-old seemed most happy he didn’t have to reach into his bankroll for added re-entries.

“I’m happy that I’m only in for one bullet,” he said. “That’s most important. The chip lead is obviously a good consolation, but I’m just glad I’m not in for more than one bullet.”

After arriving an hour and a half after the beginning of Day 1A, a few nice hands fell Garcia’s way and he slowly progressed upward. A short series of hands against one player then helped propel him to the chip lead – including an interesting scenario where a player raised blind pre-flop.

“It was a progression and then there was this small wave of where I battled with one player in several hands,” he says. “He actually straddled a hand. With a 500 big blind, he made it 1,200 and it folded to me. I had Jacks in the small blind and made it 6,500. He snap-called, clearly straddling blind pre-flop. It came 6-5-2 rainbow and he check-called. The turn came a ten and I shoved. He tanked forever and then folded.”

The next hand Garcia beat the same player in a three-bet pot and then did the same one hand later. He eventually sent the player to the rail with his ace-ten versus ten-nine with two tens on the board.

After a busy WSOP, Garcia wasn’t ready to take a break from the game.

“I got home, slept a bunch, and woke up kind of under the weather,” he says. “But I still wanted to play poker. I think I’ll settle in after this tournament.”

If he can keep the big run going, time for relaxing may take a while.