Spiked On the River 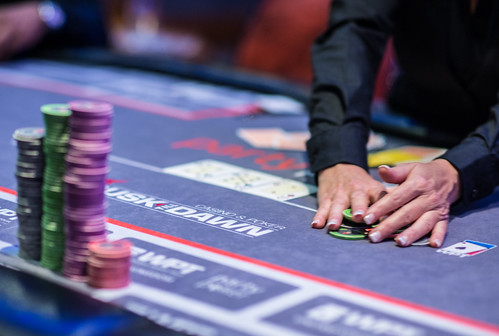 When is a chop-pot a win or a loss? Well, when you’re expecting the opposite result with one card to come.

David Jones span a 5,000 chip ito a 10,000 pot on a board of [JhJs9cAc] and got a call from his onl opponent at that point, Terence Etim. On the river, an ace fell, the [Ah] and that prompted an all-in from David Jones. Etim looked stony-faced.

"You can’t have the ace. I have Jack-nine. It’s really sick if you have it."

Eventually, Etim called, showing that he did have [Jd9h] for the flopped full house. Jones smiled, turning over [JcTs] for a chop pot, both players holding jacks-over-aces.

We’ve had a flurry of late entries here at Dusk til Dawn, with ‘Lil’ Dave Nicholson and former EPT winner Tom Middleton both pitching up in the last break and registering for the WPT-500.

"It’s a fantastic tournament." said Nicholson, who is enjoying a recent return to more of a poker schedule after establishing Graveley’s Yorkshire Fish House in his beloved Leeds. Of course, he’ll be after profit from very different chips today, as will Tom Middleton, the former EPT Barcelona champion, looking to add yet another major title to his impressive live NLH record.