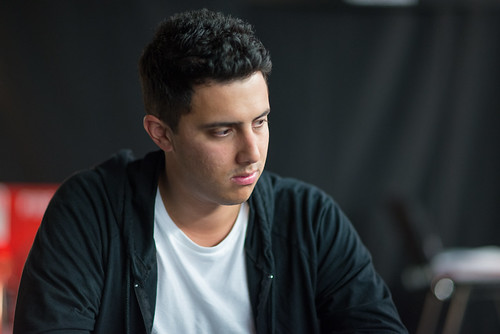 Today has seen some of the best in the business pitch up at Dusk Till Dawn, with Caig McCorkell, pictured above and longest lasting British player in the World Series just oe of them.

As well as him, Jake Cody, Chris Brammer, James Dempsey, Kevin Allen, David Shallow and many more have entered this £500 tournament with a million-busting prize-pool, but some new names are building reputations too.

Harry Beattie has been right at the top of the leaderboard since his Day 1 and remaind there now. He just called a raise pre-flop to 25,000 with [As8d] and when the flop came [4sQs7s] and his opponent shoved, Harry was calling, and spiked the king of spades on the turn to leave his opponent drawing dead.

Daryosh Rossookh is the first player to crack the million-chip stack, hailing from Bridgenorth and the Mad Marty home game – can this guy never lose?