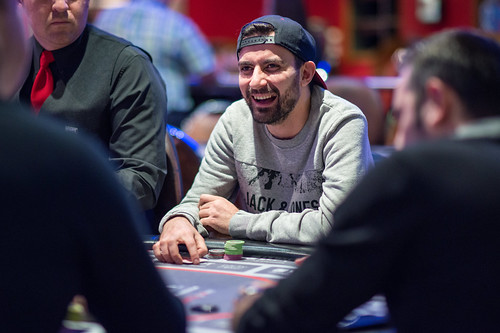 With 116 entries, Day 1B was a quieter affair than yesterday early on here at the stunning, award-winning cardroom at Dusk til Dawn in Nottingham. But once the blue touch paper was lit, boy, was it off like a rocket!

In the last few levels, players were really forced into decisions, and there was drama on every table. Karim Louis was one of three players determined to let the Gods decide their fate, all of them shoving with an ace and lower than a nine matching it.

On the middle table, Arthur Albiston got it in good with [AsJs] against [Ad6s] and looked in great shape on the flop of [Ts8s8c] but the [6c] on the turn put him behind and the [Kh] river kept it that way. He then doubled his 11,500 in the last hand when his [Jd6h] toppled [9c9d] after flopping a jack. It was hard to tell if the former Manchester United legend was happy or sad.

The day was a busy one, with just twenty-nine players surviving the excitement to book their Day 2 seat on Saturday. Simon Higgins won a huge hand when he knocked out a fellow Top 5 stack with an hour to go, and despite a blistering late run from David Zermon, pictured above, who played in fifth gear for the last two levels, Higgins has a marginal lead as the two men sit well clear at the top of the overall leaderboard.

We’ll be back tomorrow from 1pm to bring you Day 1C as the already 300-strong field grows ever close to the huge £1 million guarantee!