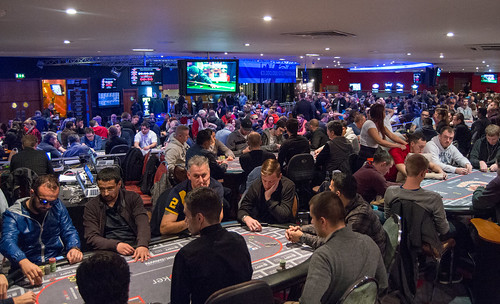 Julian Thew is a great sport. You probably know that anyway, but he was the subject of much discussion from some who had stepped away from the poker table, and having had his headphones in all day, that subject was: What does Julian Thew listen to?

Guesses were as varied as they were inaccurate. Disco, 90’s music, Gangster Rap, Mozart? Nope, none of them. In fact, Julian was keeping it local, and listening to Midlands band The Sleaford Mods.

What’s so sporting about Julian was that he was telling us this on the back of losing a monster, 140,000 pot. Having re-raised all-in on a [7h9h4c] flop, Thew turned over [5h8h] and saw that Ronan Gilligan had flopped two-pair with [7d4h]. The turn and river of [Ac] and [Qs] gave Gilligan the gold and sends Thew spiralling down from over 80,000 chips to around 23,000.

Tomorrow is possibly going to break all records here at dusk til Dawn. We’re expecting a huge, huge field, so get here as early as you can if you’re playing. Darts pros Simon Whitlock and Paul Nicholson are in the house as well as Mike Sexton and Marcel Luske!