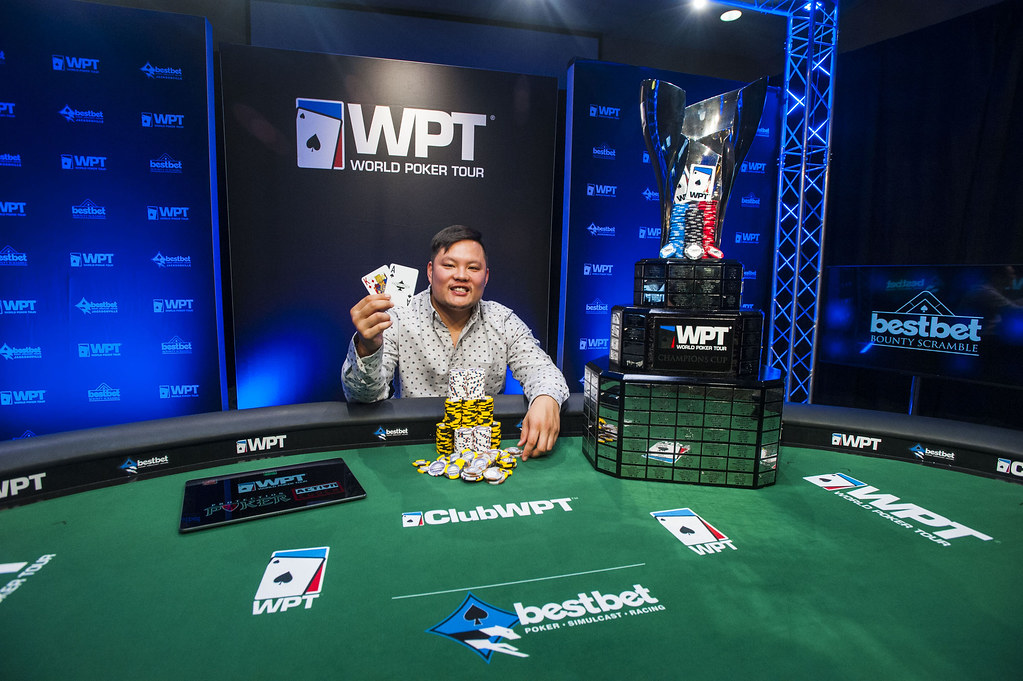 In what is an annual tradition on the World Poker Tour, another exciting final table took place at the WPT bestbet Bounty Scramble. Tony Tran emerged in Jacksonville against a stacked final table that featured 11 combined WPT final table appearances among its members. Tran was down to two big blinds on Day 2 with 30 players remaining and only two days later, is the winner of $341,486 against a field of 356 entries.

*First place includes a $15,000 seat into the season-ending WPT Tournament of Champions.

The live streamed final table started with only one short stack among the six. Dominique Mosley had already locked up a career-best cash on the World Poker Tour by making the final table but could not climb out of his early deficit.

Jake Schwartz started the day as the chip leader and added more to his stack as a result of Mosley’s demise. In the 11th hand of the final table, Mosley shoved for 340,000 in the cutoff and Tran called in the small blind. Schwartz woke up with

and four-bet to 1.4 million. Schwartz shoved for 5.195 million and Tran got out of the way.

was in rough shape and he exited after the

board gave Schwartz a straight.

The table went to four-handed when Ping Liu was busted by Ray Qartomy in fifth place. On Hand #20, Schwartz raised under the gun to 110,000 and Liu shoved for 920,000 in the cutoff with

and reshoved behind Liu. The rest of the table folded and a board of

The final four players battled for 44 hands before a short-stacked Qartomy’s run came to an end. Qartomy pushed with

in the big blind and turned an ace to secure the hand versus Qartomy.

Schwartz held a dominating 75 percent of the chips when three-handed play started but a cooler in the favor of Tran changed that dynamic.

In the second hand of the three-handed sparring, Tran raised to 140,000 on the button with

. Tran just called and the

hit the turn and both players checked. Schwartz bet 700,000 on the

river and Tran pushed for 1.3 million total. Schwartz used some time before calling and Tran earned the double.

Kelly Minkin stood in the middle of the pack for most of the final table and was in the mix during three-handed play after winning a flip against Schwartz. Tran found another big hand at the right time and Minkin ended up on the wrong side of the encounter.

Minkin limped the small blind with

flop gave Minkin the lead but the

on the turn counterfeited her hand. The

river locked up the best hand for Tran and he took the lead into heads up play versus Schwartz.

Schwartz regained the chip lead against Tran but a cooler in the favor of Tran all but locked up the title. Tran raised the button to 260,000 with

. Tran four-bet to 2 million and called all-in for 5.395 million when Schwartz shoved. The

board was all Tran and he doubled into a commanding lead.

Tran finished off Schwartz 10 hands later in the 133rd hand of the final table. Tran raised to 300,000 with

and snap-called a shove of 2.305 million from Schwartz, who had

. Both players paired on the

flop and Tran held through the

1,050 points sit next to Tran’s name in the Hublot WPT Player of the Year race and he is sixth overall with WPT Maryland champion Tony Ruberto still in first place.

WPT Montreal Up Next

The WPT moves to Canada next and Playground Poker Club for WPT Montreal on October 28. The CAD $5,300 event carries a sizable CAD $5 million guarantee and plays until a winner is crowned on November 4.